Review : Dora – Thrills only in parts 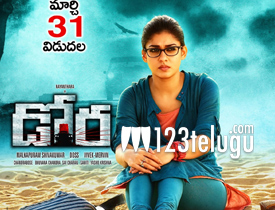 Lady superstar, Nayanthara has been doing some interesting female oriented films of late. In this process, she is back with a horror thriller called Dora. Let’s see how this film turns out to be.

Parijatam(Nayanthara) is an independent woman who starts a cab service by buying an old car. The twist in the tale arises when she finds out that her car is possessed by an evil spirit. Things become even worse as problems keep erupting one after the other. Left with no choice, Parijatam herself decides to find out the mystery behind her problems. Rest of the story is as to how she manages to find out the actual truth behind the evil spirit in her car.

Nayanthara is undoubtedly the biggest asset of the film. Apart from looking beautiful in those simple clothes, Nayan gives a stand out performance and is the mainstay of the film. Her performance in the police station scene and many places during the second half is superb.

The basic plot and the way the entire backdrop is based on a car look interesting. The second half of the film is pretty okay. The basic emotions relating to the flashback look quite realistic. The way the entire plot is connected through major characters has also been executed well.

As the actual story kick starts only in the second half, the first part is quite dull and nothing much happens during this time. Some scenes featuring Nayan and her dad, the family bonding and unnecessary sequences featuring the cab irritate the audience to an extent.

Since the twist is revealed after a point in the second half, things become quite predictable and routine. The climax of the film is also quite simple and boasts of nothing new.

Even though there are certain scenes which have been showcased in a novel way, they do not bring much depth to the film. There are not many horror scenes in the film which might disappoint many.

Camera work in Dora is superb as Dinesh Krishnan brings a superb feel to the entire film with his brilliant lighting. Solomon’s background score is apt and gives the film the much-needed edge. Editing should have been better during the first half. Production values and dubbing formalities looked after by Malkapuram Srinivas are decent.

Coming to the director Ramaswamy, he has executed the film with an half-hearted approach. Even though he chose an interesting backdrop, the way he has bored the audience through the first half kills the film completely.

On the whole, Dora banks heavily on Nayanthara’s star status. Her rocking performance and interesting second half are basic assets. But to absorb all these things, you need to patiently sit through the boring and dull first half which kills the zeal of the viewers by then. If you are okay with the above-said things, then go ahead and give this thriller a shot only if you have nothing else to do this weekend.