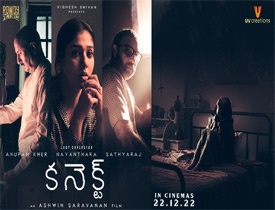 Nayanthara is back with one more female-centric film of hers called Connect. The horror thriller has been directed by Ashwin Saravanan and has been released in Telugu today. Let’s see how it is.

Susan(Nayanthara) loses her husband(Vinai Rai) to Covid. This upsets everyone and especially Susan’s daughter Anna gets affected a lot. She tries to talk to the spirit of her dad taking the help of an external force. But in a tragic turnaround of events, an unknown spirit enters her and creates havoc in the family. How will a helpless Susan deal with this situation? Whose help does she take is the story of the film.

The basic aesthetics of the film are done right. Though the film happens in just two rooms, it has been lit up well and creates a tense mood for the audience. The climax part has been handled well and the scenes where the spirit leaves the body are shown in a good way. The girl who played Anna was good in her key role.

Anupam Kher as the priest brings depth to the film with his performance. Vinay Rai was okay in his small role. Satyaraj is neat but he hams a lot in the latter part of the film. Nayanthara has done a passable job in the film. There is nothing great for her to showcase her talent but still, the film becomes watchable only because of her.

Vignesh Shivan produced the film and it is hard to understand what novelty he found in the storyline. An evil spirit entering the body of a girl, and a priest coming to help her, have been showcased right from her childhood onwards.

The film has so many logical issues. Why the girl decides to talk to the spirit of her father, whose spirit actually enters her body, and what’s the back story none of this is explained properly in the film. It is more or less like a short film extended into one.

Emotion-wise, there is not much depth in the relationships. The mom feeling tense for her daughter going through hell has not been showcased well. Barring a few thrills, there is nothing new that the film showcases.

As the film is shot only in two rooms, the camerawork needed to be top notch and it is. The BGM could have been more effective. The Telugu dubbing is fine and so were the production values.

Coming to the director Ashwin Saravanan, his last film Game Over was quite good but with this film, he chose a subject, added a star like Nayanthara, and made a one and half-hour film and sold it to the audience who do not buy his vision.

Generally, thrillers keep you hooked to know what’s the suspense behind the spirit. But here there is nothing of that sort happening. It is a plain thread executed in an unengaging manner. Ashwin divides the days of quarantine and shows thrills each. But so many scenes of panic are cut half way through irritating the audience.

On the whole, Nayanthara’s Connect is a poorly made horror thriller that has nothing new to showcase. The climax is good and Nayanthara helps the audience to sit through. But the rest of the plot, narration, and thrills are unengaging making this film a dull watch this weekend.