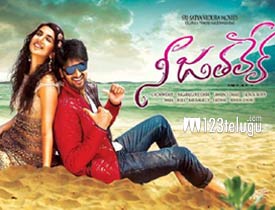 Naga Shourya has become a bankable hero now with some good hits under his belt. But, his first film which he acted, Ne Jataleka never saw the release light. Finally, the film managed to see the release today. Let’s see how it is.

Akhil(Naga Shourya) has a rich girlfriend called Swapna(Sarayu). He keeps fighting with her all the time and breaks up with her one fine day. Seeing Akhil’s condition, his best friend suggests him to make his girlfriend jealous so that she will come back to him.

Taking this as an advantage, Akhil requests his own friend’s girlfriend(Parul) to help him out. But the twist in the tale arises when both Akhil and Parul fall in love instead. What will they do now ? How will they manage their respective lovers and win their love ? That forms the rest of the story.

One of the biggest attractions of the film is the main heroine Parul. She looks decent and performance wise too, she has done an okay job during the second half. The music of the film is pretty good as all the songs are quite hummable and have also been even shot well.

The last half an hour is slightly better as the love triangle has some emotional moments. Production values of the film are very good as the proceedings have been shown quite decently. The emotional breakup scenes between the lead pair have also been showcased well.

The narration of the film is so bad that a good actor like Naga Shourya also looks over the top and helpless. His disinterest in the film clearly shows on screen and the bad direction makes this routine and predictable love story even boring.

The story of the film is as old as our ancestors. The taking, scene execution and the various dialogues used to project love are pathetic and can leave you with a headache.

There is absolutely no clarity in the characters showcased as the lead pair behave weirdly in many scenes. Sometimes they are in love and sometimes they say that they are just friends. Such is the situation of this film which has no direction at all.

As said earlier, both music and production values are very good. Editing is just about okay and so was the art direction. The screenplay is very bad as the makers have messed up a simple love story to no extent. The dubbing of the film is horrible. Coming to the director Lawrence Dasari, he has done a very poor job with the film. Rather than narrating a simple story in a straight forward manner, he adds so many outdated and unnecessary scenes that will bore you completely.