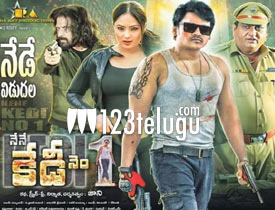 Comedian Shakalaka Shankar is back with another caper called Nene Kedi No 1. This film which has been in the making for a long time has hit the screens today. Let’s see how it is.

Jackie(Shakalaka Shankar) is a roadside Romeo who misses the love and care of his parents. Because of this, he gets into a wrong path and wastes his time. But after a time, he singles out kids who are going through the same problem as him and kidnaps them and treats them well. This is also the same time when yet another Shankar(Shakalaka Shankar) is brought into the picture. So, who is this look alike and what connection does he have with Jackie forms the rest of the story.

Shakalaka Shankar is good in his double role and tried to evoke decent comedy with his body language. Heroine Muskan looks beautiful and also did well with her performance in her crucial role. 30 years Prudhvi was hilarious in his small role. The actor who played the main villain Bijju was good in his role. Rest of the cast was strictly okay.

Except for a few scenes, rest of the proceedings were narrated in a horrible manner. They do not have logic, clarity, and direction as they have been executed with so much confusion. The audience gets a feeling that they are watching two parallel films as the narration is that poor.

The film has so many build-up shots created for Shakalaka Shankar that you feel like running away from the theater at once. There is absolutely no flow in the film and this gets on to the nerves of the audience.

Production values of the film are pretty good. Ajay Patnaik’s music is below par but his background score is impressive. Editing is horrendous as close to 15 minutes could have been easily chopped off in the film. The camerawork in the film is decent and so was the production design. Coming to the director Jani, he made a mess with the film and did not impress in any department. Right from the story to the way he has executed this comedy caper, everything falls flat and torchers you completely.

On the whole, Nene Kedi No 1 is a horrendous masala entertainer which irritates you to another level. There is not one element which works in the film and seeing the build shots on Shakalaka Shankar, you will lose the small-time impression which you have gained on him from his previous good films and roles. That is the impact this film creates on you and ends as a horrible watch. Stay away from this one.