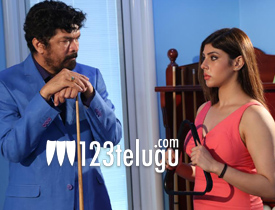 Starring : Posani Krishna Murali and others

Continuing the trend of low budget films, yet another movie, Nenu Kidnap Iyyanu has hit the screen today. Let’s see how it is.

The film is based on the story of a group of friends who decide to start up a software company. They take their project and meet a top-notch IT person called Dubey(Posani). Impressed by their work, Dubey appoints them as his teammates and promises them to take their project to an even higher level.

The twist in the tale arises when Dubey sells off the project to another company and makes a lot of money. Rest of the story is as to how the friends teach Dubey a lesson and get their project back.

Posani Krishna Murali, who played an MNC company boss impresses to an extent with his typical mannerisms and body language. His dialogues evoke a few laughs here and there.

The new bunch of artists, who played the main leads did an okay job in their roles. Comedians Prudhvi and Raghu Babu are decent in their respective characters and entertain in parts. Prudhvi’s dialogues as a lawyer are especially good in the climax sequence.

One of the major minus points of the film is the flat and boring narration. Though the runtime is crispy, the audience gets the feel of the film going on forever. The way the friends manipulate Posani looks over the top and unconvincing. Also, the way all the friends get together and decide to start a software company has not been showcased effectively.

Star comedian, Brahmanandam, who made a special appearance totally disappoints with some outdated comedy punches. The film is filled with many illogical scenes which look totally over the top.

Director Srikar Babu’s idea of mixing technology in a kidnap crime drama is good but he failed in executing the story in a gripping and interesting manner. Except for a few technology-related scenes, the screenplay is totally outdated with a flat narration.

The cinematography is okay and a few natural locations in Vizag are captured well. Editing work is adequate. There are a few unwanted scenes which can be easily chopped off.

Music by Srikanth is decent and two situational songs which come in the first half are good to listen. Production values for this limited budget film are good.

On the whole, Nenu Kidnap Iyanu is a half-baked crime drama which has nothing much to offer. Though Posani’s acting and typical mannerism evoke a few laughs, the boring and outdated narration without any proper engaging scenes will not appeal to a larger section of the audience and makes this film a disappointing watch this weekend.