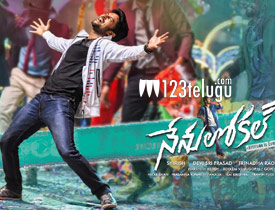 Natural Star, Nani is in full swing with back to back hits. He has now come up with a youthful entertainer called Nenu Local. Produced by Dil Raju, this film has hit the screens all over today. Let’s see whether Nenu Local gives Nani yet another hit in his career.

Babu(Nani) is a happy go lucky youth who falls in love with Keerthi(Keerthi Suresh). He starts wooing her and after a lot of effort finally manages to impress her. Right when things seem to be going fine, a huge disturbance erupts in the form of Keerthi’s dad (Sachin Khadekar) and inspector Siddharth Varma(Naveen Chandra).

Who is this cop? What is Keerthi’s dad up to? and how does Babu solve all his problems and ends up marrying Keerthi ? That forms the rest of the story.

One of the biggest plus points of the film is the entertaining narration by director Trinadh Rao. Even though the story is routine and ages old, the proceedings are filled with good comedy and romance.

Nani takes his stardom to the next level with Nenu Local. Till now, everyone has seen Nani’s good performances but Nenu Local shows him in a complete mass avatar. His heroism, dialogue delivery, and mass avatar are on full display. Nenu Local, once again proves that Nani is picking interesting films which will help his career big time.

Keerthi Suresh is superb and her chemistry with Nani is a major boon to the film. The first half has good fun and Nani’s love track with Keerthi has been executed well. Some comedy episodes like the police station and pre-wedding scenes evoke good comedy. Naveen Chandra is impressive in his role and so was Hindi actor Sachin Khedekar.

As said earlier, there is absolutely nothing novel in the story line. Stories like these, we have seen many a time in the past. There are many scenes in the film which have been stretched to no extent and only increase the run time.

The climax of the film looks a bit over the top and major audience will not be okay with the manner in which things are ended. The last fifteen minutes of the second half become slow and hugely predictable.

Devi Sri Prasad’s music is undoubtedly yet another asset of the film. All the songs are quite good and have also been placed well in the film. Production values by Dil Raju are neat as he has not compromised on the look of the project. Dialogues are massy and suit the body language of Nani quite well. Editing is just about okay as there are many scenes which needed to be edited out in both the halves.

Coming to the director Trinadh Rao, he has done a good job with the film. Even in his earlier project Cinema Choopista Mama, the father in law concept was the main theme and here too, the same is repeated. The only difference is there is more fun and the director has Nani’s star power to elevate the proceedings. Trinadh Rao has showcased Nani as a star hero and made this film a perfect pad to take Nani’s star status to even bigger heights.

On the whole, Nenu Local is a likable love story which is aimed at the youth and mass audience. Today’s younger generation will surely connect to Nani’s character and performance which is the biggest highlight of the film. If you ignore the routine story line and predictable proceedings, this film has decent fun, good songs and some light hearted entertainment which makes up for a good time pass watch this weekend.