Review : Next Enti – Contemporary but slow 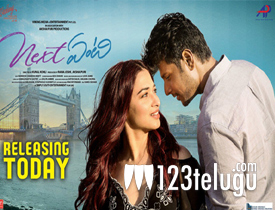 Hindi director, Kunal Kohli is making his Tollywood debut with the rom-com Next Yenti. Starring Tamannah, Sundeep Kishan and Navdeep, this film has hit the screens today. Let’s see how it is.

Tammy(Tamannah) is a modern girl who breaks up with her boyfriend as he does not believe in true love. This is the time, she meets Sanju(Sundeep Kishan) and connects with him instantly. They start living together but Tammy is against a physical relationship with Sanju. This upsets Sanju and he breaks up with Tammy. During this time, Sanju meets another girl and Tammy starts liking Krish(Navdeep). Rest of the story is as to how Tammy and Sanju realize their love for each other and finally get back together.

Tamannah looks ultra gamorous and is superb in the role of Tammy. She does wonderfully well as the girl who is looking for true love and is one of the biggest highlights of the film.

Sundeep Kishan looks quite sharp in this film and is very good as the modern boy. His performance in this film is quite settled when compared to all his previous movies. Navdeep is good as the mature guy and it is nice to see him choosing different roles these days.

It was very good to see Sarath Babu in a crucial role after a very long time. He plays Tamannah’s dad and his track has been showcased supremely well. The manner in which a modern girl shares all her views with her dad has been dealt well.

The second half is where things get bogged down. The pace of the film becomes too slow and the proceedings get dragged on and on. There are a lot of conversations in the film and because of this, many may get a feel of so much lag in the proceedings.

Even though Tamannah’s character starts off well, the manner in which it is executed does not justify her stand. The director should have narrated her role with a lot more clarity. Things get over dramatic in the second half as the emotions and situations look forced.

Camerawork by Manish Chandra is top notch as the film looks uber cool and quite lively. Editing is below par as the second half could have been made even brisker and racy for the audience. Production values of the film are top notch. Dialogues need a special mention and especially those written for Sarath Babu are superb.

Coming to the director Kunal Kohli, he chooses a contemporary concept and handles the first half well. But his narration lacks the punch in the second half as the proceedings become dull and take their time to unleash. If he would have made the second half brisk and narrated things with more clarity, the output would have been even better.

On the whole, Next Yenti is a contemporary love story which clicks in the initial stages but goes down thereon. Interesting characterizations, lovely visuals and a neat first half are basic assets. But the slow pace, lengthy second half and too many conversations in the film bore the audience by the end. Tollywood audience is new to this kind of narration and we need to see how they embrace this film which takes its own time to grow and has complete lag in the narration.