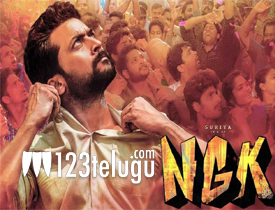 Right from the time, Suriya’s NGK was announced, it did not create a good buzz in the Telugu states. The film directed by Selva Raghavan has hit the screens today. Let’s see how it is.

NGK(Nanda Gopal) is a well-educated person who leaves his corporate job and does organic farming in his village. He does social service and keeps getting into trouble most of the time. In one particular issue, he observes that a small corporator in his town solves a major problem for him. This leaves NGK stunned and understand the fact that in order to do good for the people, politics is a big platform. He then enters politics and finally becomes a CM. How does he do that facing several obstacles is the crux of the film.

Suriya is the only solace in the performance department as he does his role quite sincerely. The star hero has a good screen presence and tries to hold the film with his impressive act.

The scenes where Suriya helps the local MLA by acting obediently have been showcased in a funny and good manner. Rakul Preet did her serious role to the best of her capabilities and looks good on screen.

NGK is filled with so many negatives that it is hard to put everything here. Firstly, it is hard to understand as to how Suriya agreed to do this film which has no soul. The research done on politics is weak and this shows in the weak proceedings of the film.

The film is filled with so many boring scenes that you feel sleepy most of the time. The director loses grip in the first fifteen minutes itself as the basic drama which is needed in political thrillers is missing here.

For the first time, you will hate Sai Pallavi on screen. Her role has no weight, meaning, and sense and the manner in which she is shown as the doubtful wife looks silly and Sai Pallavi does the worst job.

The dull interval bang, hurried climax and lack of basic conflict, this film has it all as it has not been narrated in a proper manner. Lack of a good villain is also a big letdown here.

Production values of the film are below par as the movie is filled with heavy Tamil flavor. Music by Yuvan Shankar Raja is bad but his BGM was good. Dialogues were just about okay and so was the Telugu dubbing. The production design was not good and so were the lyrics.

Coming to the director Selva Raghavan, he has lost it completely from the first ten minutes itself. His narration lacks clarity, focus, and direction. Even after having an actor like Suriya, he failed to generate any drama with the proceedings. There is no seriousness in the script as scenes wander here and there making it a tedious watch for the audience.

On the whole, NGK is a simple political drama gone wrong. Lack of basic conflict, gripping drama, and entertainment are huge drawbacks for this film. Suriya needs to erase this film from his memory right away and choose a fun film to make a comeback as NGK does not provide the entertainment or thrill that you look forward to in a political thriller.