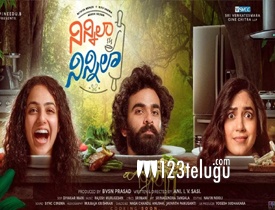 Post the lockdown, multiple films are releasing one after the other, and Ninnila Ninnila is one of them. The film has hit the small screens on Zeeplex and let’s see how it is.

Dev(Ashok Selvan) is a chef who has no direction in life. He is overweight and has body spasms scaring everyone around him. He heads to London to work under this master chef(Nasser) in one of the biggest restaurants in town. There, he meets Tara(Ritu Varma) who is also a chef and finds Dev’s actions weird. One fine day, Dev and Tara get stuck in the kitchen and things change from there. Tara comes to know about Dev and his past with Maya(Nithya Menen) and falls for him. How all this happens is the story of the film.

The performances of the film are quite good and especially Ashok Selvan was amazing. The way he plays the role of overweight and weird chef looks quite good. The manner in which Ashok brings out those spasms and acts during the latter part of the film was amazing.

Ritu Varma looks a bit shaky in the beginning but comes on her own in the second half. In some of the emotional scenes, Ritu is quite brilliant in film. Nasser was strictly okay in his role. Comedian Satya does well in his limited role in the first half.

Nithya Menen’s role looks a bit over the top but once you get used to her, one would surely end up liking her character. Her chemistry with Ashok Selvan is quite endearing to watch on screen. The visuals and BGM of the film are quite good.

One of the biggest drawbacks of the film is the deadly slow pace. There are so many scenes that can literally put you to sleep. Such slow is the pace of the film. There is absolutely nothing that happens in the first hour of the film as the silly humor related to the hotel chefs is on display. One cannot understand what is the basic conflict point in the film until Nithya Menen enters the scene.

After knowing Nithya and Ashok Slevan’s story, Tara played by Ritu Varma falls for Ashok Selvan and this looks odd. She does not have much of bonding with the hero but suddenly gets close to him by the end. All this looks rushed and artificial.

The director tries to narrate the film in a poetic manner with lengthy scenes and good visuals. But the basic emotions are not that strong to impress you.

The entire film is shot in London and the visuals are beautiful. The dialogues are good but Nithya Menen’s dubbing sounds super weird. Editing is horrible as close to 20 minutes, in the beginning, could have been erased. The production design, camera work, and music are just about okay.

Coming to the director Sasi, his plot looks interesting but the narration is insipid. Things get clarity only in the end and for this, one has to sit through the boring one and half hours. There is nothing much to rave about as the way Sasi unleashes the emotions and scenes is dead slow and dull.

On the whole, Ninnila Ninnila is a dead slow romantic drama that takes ages to come to its basic theme. Once it reaches there, things look decent and are also ended well. The lead cast’s performances are also good and the last half an hour is interesting. But to enjoy that you need to go through the snooze fest that is showcased in the beginning. If you are okay with it, give this film a shot.