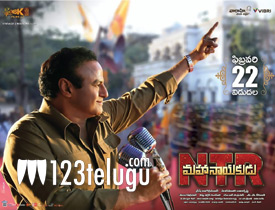 After NTR Kathanayakudu, all eyes are on NTR Mahanayakudu. The second part is based on NTR’s historic journey in politics. The film had its premiere at AMB Cinemas yesterday evening and has finally hit the screens today. Let’s see whether the film succeeds in living up to the hype and expectations.

NTR Mahanayakudu’s story begins with NTR (Nandamuri Balakrishna) launching the Telugu Desam Party. He then tours across the erstwhile Andhra Pradesh and campaigns on his iconic Chaitanya Ratham, with his son Harikrishna (Kalyan Ram) as his charioteer.

With the massive public support, NTR becomes the Chief Minister. The real drama begins when NTR loses power due to a political conspiracy. How NTR fights his way back to power and how his better half Basavatarakam (Vidya Balan) loses her battle with cancer form the main crux of the film.

Simply put, Balakrishna shoulders the film with his one-man show. He delivers a fiery performance in his father NT Rama Rao’s role. Especially, Balayya’s power-packed acting in the confrontational scene with Indira Gandhi about Telugus’ self respect and his subtle histrionics and expressions in the Assembly scene will enthrall his fans. On the whole, NTR biopic will be remembered as one of Balayya’s finest performances in his career.

National award-winning actress, Vidya Balan as Basavatarakam brings in emotion and depth to this political drama. She looks endearing in the scenes showcasing her love for her ‘bava’ NT Rama Rao. Bollywood actor Sachin Khedkar gets a meaty role and does quite well as NTR’s friend turned foe, Nadendla Bhaskara Rao.

Kalyan Ram as his father Harikrishna and Rana Daggubati as NTR’s son-in-law Nara Chandrababu Naidu give decent performances. Rest of the actors like Bharath Reddy as NTR’s another son-in-law Daggubati Venkateswara Rao and Vennela Kishore as Rukmangadha Rao are adequately utilized by director Krish.

Too much of drama happens at breakneck speed, and it gives a serious tone to the movie. The scenes between NTR and his wife Basavatarakam lack the required depth and it leads to a half-baked subplot.

The climax, which showcases Basavatarakam’s death, looks abrupt and is slightly underwhelming. It could have been narrated in a better manner.

Special mention must be given to Krish for the way he maintains drama and emotions in NTR’s political and personal lives. Right from penning an intense script that showcased NTR’s journey which was full of ups and downs to extracting fine performances from his actors, Krish has done a commendable job.

Veteran music composer MM Keeravani shows his genius yet again with his thematic background score that highlights the intensity and drama in the narrative. Cinematography by VS Gnana Shekar is realistic, as a majority of the film was shot in real locations and outdoors. Ramakrishna’s editing should have been a bit sharp in a couple of elaborate political scenes.

Art Director Sahi Suresh too deserves a pat for keeping the milieus as realistic as possible. Writer Sai Madhav Burra plays to the gallery as he elevates NTR’s magnanimity and firebrand attitude with his dialogues. The film’s production values are decent.

On the whole, NTR Mahanayakudu showcases NTR, the legendary politician, to the current generation. Balakrishna’s splendid performance as NT Rama Rao and Krish’s deft handling of the political events that rattled Andhra Pradesh in the late 80s are the major highlights of this political drama. On the flip side, the abrupt climax, the serious tone throughout the film and a slightly underwhelming subplot between NT Rama Rao and his wife Basavatarakam may hinder the film’s prospects to an extent. NTR Mahanayakudu is definitely a one-for NTR fans but for the regular audience the film may end up as just a one time watch.