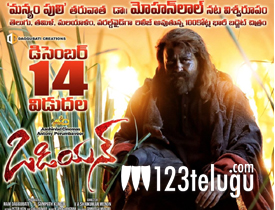 Mohan Lal’s much-awaited Malayalam flick, Odiyan has been dubbed in Telugu with the same title and has released all over today. Let’s check how the film is.

Odiyan Manikyam (Mohan Lal), who is away from his native village for over fifteen years returns back to safeguard Prabha (Manju Warrier) and her family. Who is this Prabha and what is the relation between her and Odiyan?, Why was Odiyan Manikyam away from his own village in the first place? and What is the role of Raja Rao in this entire episode? To know all this, you have to watch the film on the silver screen?

Keeping aside the superstar tag, Mohan Lal did whatever he could do for the film with utmost dedication and commitment. His settled performance and the amount of hard work he has put in those risky action sequences should be appreciated.

Heroine Manju Warrier is good looking and did justice to her given crucial role as a responsible woman in the family. Her acting in a few crucial scenes is impressive. Prakash Raj is okay as a wicked-minded baddie. One family song between Manju and her sister with comes in the first half of the film is picturized nicely.

One of the major drawbacks of the film is that it is has a slow-paced narration with not many gripping scenes throughout the film. Though the core point is a simple revenge drama, it lacked a proper screenplay and racy proceedings.

Mohan Lal’s character is not designed in a convincing manner because of which the audience gets a valid doubt as to why is he changing various getups in the film and for what reason.

Lack of entertainment in the form of comedy and energetic songs in also yet another minus for this film which runs on a serious note.

Director V. A. Shrikumar Menon’s idea of narrating a revenge drama by patching it up with a new concept is decent but he failed completely in the presentation. If he would have given a better detailing about the Odiyan concept and narrated it in an interesting manner, the result would have definitely been positive.

Editing by Johnkutty is not up to mark as close to thirty minutes of the film can be chopped off easily. Cinematography by Shaji Kumar is decent as he captured the natural locations nicely. Music is below par and so was the background score. Production values for this big- budget starrer are just okay.

On the whole, Odiyan is a pretty regular revenge drama which lacks proper punch in it. Though Mohan Lal did justice to his role, the director miserably failed in narrating the proceedings in a commercial format hence making the film a below par and disappointing fare this weekend. Skip it and look for something else.