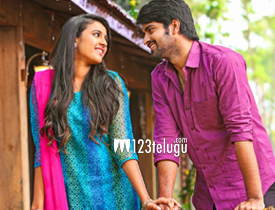 After a huge round of promotions, the Naga Shourya and Niharika starrer, Oka Manasu has finally hit the screens. Let’s see how the film fares.

Sandhya(Niharika) is a doctor in Vizag who falls in love with an aspiring politician called Surya(Naga Shourya). The young couple hit it off instantly and fall neck deep in love. Sandhya does not like Surya’s interest in politics which keeps getting in between their love story.

Twist in the tale arises when Surya gets involved in a scam and ends up in jail for the next three years. What happens to Sandhya during this time ? Does the love story fall apart ? and how do things materialize in the end. To know answers to these questions, you need to watch the film on the big screen.

One of the biggest asset of the film is the fresh pairing of Shourya and Niharika. Both these actors look lovely on screen and are the major highlight. Their chemistry and performances holds the film most of the time. Naga Shourya is undoubtedly the highlight of the film. He plays a very complex character and the way he holds his emotions throughout the film is quite commendable.

Niharika makes a super confident debut. She has striking screen presence and has also done exceptionally well in the acting department. Be it her body language, good looks or the way she handled her complex role, it speaks volumes of her talent and is a superb feat for a debutante.

Songs and beautiful visuals of the film is yet another major highlight. Especially the songs carry the film forward and the way they have been shot on the lead pair is very good. Rao Ramesh is decent in his character. Climax of the film is a bit hard hitting and carries good emotions.

One of the biggest demerits of the film is the slow pace. The film takes for ever to go through its proceedings. For common audience, it will surely test their patience. Length of the film is also a tad too long as many scenes could have been edited.

One needs to get connected to such stories other wise they can end up getting bored right away. Yet another major drawback is the lack of drama. The director fails to infuse any kind of drama or other conflicts points to give this love story the necessary push or seriousness.

For the climax to be so hard hitting, there are no strong elements in the entire film which could lead to such an ending. The various tensions and pressures that a couple face in reality have been ignored. Oka Manasu also looks a bit outdated at times and the makers should have set it during the 90’s to bring in a believable factor.

Credit should go to the superb camerawork which showcases the film in a stunning way. The montage shots, conversations between the couple and realistic backdrop of Vizag have been executed well. Editing is below average as there are a number of scenes which could have been chopped off. Dialogues are excellent and so is the music by Sunil Kashyap. Every song is good to hear and has also been shot well.

Coming to the director Rama Raju, he sets the film in 2016 but the proceedings remind you of the 90’s. If he had the set the film during that time, the conversations and climax would have been totally believable. Adding to this, he narrates the film with such a snail’s pace that it vexes the audience at times. But credit should go to him for giving the lead pair some extraordinary characters and projecting them in a superb light.

Oka Mansu is a simple love story with some stellar performances from the lead pair. Niharika makes a striking debut and is surely here to stay. But the slow pace of the film, lack of proper drama and excessive length can get to you at times. One needs to instantly connect to such stories or else you can get lost easily. All those who want to see the fresh pairing can surely give this film a shot for their striking chemistry. But for the others, go in well prepared for the slow pace and lack of any basic entertainment.