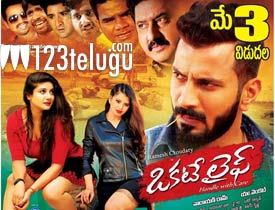 Along with a bunch of small films, yet another film titled, Okate Life has also hit the screens today. Let’s see how it goes.

Ram(Ramesh) is a money-minded guy who establishes an agency for those who have problems in love. In that process, Ram helps his close friend Prem in marrying his girlfriend Priya. When everything is going well in their life, Prem cheats Priya and flees away. Why did Prem cheat Priya? Is there any strong reason behind it? How will Ram risk his life to find the whereabouts of Prem? To know this, all have to watch the film in the theaters.

Hero Ramesh is okay in his rough look and tried to evoke decent emotions. His hard work in dances and fight sequences is visible on the screen. Comedian Venu gets a meaty role in the film and did justice to his character. A social message given towards the end is nice.

Heroine Shruti Yugal and other actors, who are seen in the hero’s gang are okay in there given roles. Senior artist Suman shines in a special appearance. The main theme of the film which deals with the popular online game Blue Whale is good and so is it’s crisp detailing.

The film starts on a decent note by showcasing a scene related to Blue Whale game but gets totally diverted without its reference in the entire first half. Things are narrated in a hasty manner and there is no clarity in the proceedings.

If this was not enough, the narration and proceedings totally take a new turn in the second half which gives a feeling of watching two films on a single ticket. Except for the climax portion, the entire film runs on a flat note with unengaging narration which is also a minus for the film.

Director M Venkat’s thought of making a film on deadly game Blue Whale is appreciable but his narration lacks basic depth. His screenplay is confusing and abrupt most of the time. If he would have narrated the proceedings with proper clarity, the result could have been much better.

Editing work is okay as a few scenes and a duet in the climax can be trimmed to make things better. Cinematography by Giri is decent. Music by Amrish is adequate but the background score by Sunil Kashyap was below par. Production values for this low-budget film are decent.

On the whole, Okate Life is a message-oriented film which falls flat in every department. It tries to showcase the disadvantages of an online game like Blue Whale but the narration is hideous and outright boring. So, happily skip this film this weekend and watch something else interesting.