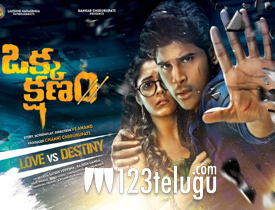 The Allu Sirish and Surabi starrer, Okka Kshanam has been promoted well all over. Directed by VI Anand, this film has hit the screens today. Let’s see how it is

Jeeva(Allu Sirish) and Jo(Surabi) are a couple who are neck deep in love. When everything seems to be going well in their life, they come across a couple played by Srinivas Avasarala and Seerat Kapoor who are going through a lot in their marriage. To their shock, they find out that whatever is happening in the couple’s life is getting repeated in their lives as well.

Upset with this, they come to know that it is a parallel life concept which is happening in their lives too. The twist in the tale arises when Seerat Kapoor gets killed all of a sudden and things go haywire. So, keeping the parallel concept in mind, will Jo get killed too? and How will Jeeva handle these situations? That forms the rest of the story.

One of the major plus points of the film is its fresh and unique concept. Director VI Anand should be appreciated for introducing this genre to Telugu cinema. Acting wise, Allu Sirish has improved a lot and did a pretty decent job in his role. His performance in a few emotional scenes was impressive.

Heroine Surbhi is perfect in her given role and impresses with her cute looks. Yet another lead pair, Srinivas Avasarala and Seerat Kapoor’s onscreen chemistry is good. Performance wise, they both acted well in their given crucial roles.

The first half of the film is good and has some engaging moments. The interval twist is also very crisp and has been handled well.

Though the film has a unique concept, the narration in the second half dips a bit. The way the entire setup is showcased may not appeal to the audience who likes the typical commercial entertainment.

Director failed in inserting some good comedy episodes as comedians Praveen and Satya were not utilized completely. The pace of the film is also slightly slow in certain areas.

Cinematography by Shyam K Naidu is decent as he carried the film’s mood throughout. Editing by Chota K Prasad is good and he kept the proceedings short and crispy. Music by Mani Sharma is just about okay but his background score is good. Production values for this limited budget film are good.

Coming to the director VI Anand, he has done a decent job by attempting a different genre in Telugu films. The way he narrated the first half is good but he makes things a bit routine during the climax part. Otherwise, he has connected the parallel life points quite well and makes things interesting for the audience.

On the whole, Okka Kshanma is a concept based thriller which has some interesting moments throughout. The engaging concept, decent suspense, and well-narrated proceedings are basic assets. The film will easily be liked by the overseas and multiplex audience. If you ignore the slightly slower pace and a typical climax, this film has some thrilling elements and makes for an interesting watch this weekend. Go for it.