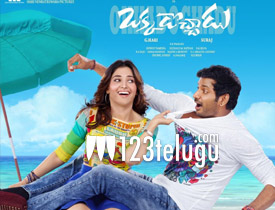 “Okkadochadu” (Kaththi Sandai in Tamil) is probably the last bilingual of the year and this film releases amidst stiff competition from ‘Vangaveeti’ and ‘Saptagiri Express’ the other two much-anticipated Telugu releases. “Okkadochadu” is Vishal’s second Telugu release in 2016 with his previous outing being the average “Rayudu”. So let’s sit back and read on to know what this Vishal and Tamanna starrer “Okkadochadu” has in store for us!
Story :

“Okkadochadu” starts out simply enough by showing DGP Chandrabose (Jagapathi Babu) as a daredevil cop who successfully captures Deva (Sampath) and recovers 50 crores from him. Vishal makes his entry as Arjun, the small town boy, who has come to the big bad city to pursue Divya (Tamanna). Despite being clueless about his background, Divya falls in love with Arjun and they are all set to take it forward. DGP Chandrabose, Divya’s brother, approves the match when in a sudden twist Arjun reveals his identity as a CBI officer and confiscates 250 crores from the DGP. In the next scene, it is revealed that Arjun is not a CBI officer and this was an elaborate plan to steal the 250 crores from the DGP and Deva who are working together!

What is Arjun’s motive for doing this? What is his background? How does he manage to evade the DGP and Deva who are in his pursuit? The answer to these questions is what the rest of “Okkadochadu” is all about!

What works for “Okkadochadu” are the character of DGP Chandrabose and Deva played by Jagapathi Babu and Sampath. These two fine actors add some depth to their characters and give the audience something to look forward too.

Vishal, who is there in almost every scene, performs decently enough despite the script not offering him too much scope to excel. Tamannah looks good in songs.

“Okkadochadu” falters hugely thanks to a loose script that does not build up the narrative. The first half sees nothing happening until the last 10 minutes leading to the intermission. Tamanna hardly has any screen-time in the second half except for a song and 3 scenes.

Huge stretches of screen time are dedicated to Vadivelu’s jarring comic track that is just not funny. The songs are forced into the screenplay and they end up stretching the run time due to their generic nature.

The action sequences around the car chase was choreographed well and kept one engaged. The music by Hip Hop Thamizha was lost thanks to the unimaginative choreography. The director should have focused in keeping the first half engaging.

Though the film is touted to be a Tamil-Telugu bilingual, there is an overwhelming Tamil influence everywhere right from the mannerisms to the atmosphere.

On the whole, Okkadochadu is the same old story in the same old bottle. There is not much to keep you engaged and the social message in the end seems forced.