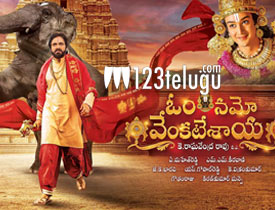 Akkineni Nagarjuna is a master when it comes to doing devotional films. Once again, he is back with a very interesting film called Om Namo Venkatesaya. Directed by the legendary Raghavendra Rao, this film has hit the screens today. Let’s see how it is.

Right from his childhood days, Ram(Nagarjuna) takes upon a journey to make contact with the eternal powers of the god. He joins the ashram of Padmananda Swamy(Sai Kumar) in Tirumala and gets enlightened about Lord Venkateswara and his spiritual powers. To seek more divinity, he reaches the main temple in Tirumala and starts praying for the lord.

God answers his prayers as lord Venkateswara himself appears before him and acknowledges his sincerity. During the same time, there are many other criminal factors that Ram needs to face in the temple town. What are those problems? What kind of relation does Ram share with lord Venkateswara? How did he become Hathi Ram Baba? and where do Krishnamma(Anuska) and Pragya Jaiswal feature in this entire set up? To know answers to these questions, you need to watch the film on the big screen.

When everybody was stunned to see Nagarjuna perform the way he did in Oopiri, the superstar takes things a notch higher and totally owns Om Namo Venkatesaya. Probably, this is one of Nag’s best performances to date and the way he plays the emotional devotee of Lord Venkateswara will mesmerize you completely. Be it his longing to meet the lord to his facial expressions, Nag takes you on an emotional journey. The way he performs during the climax is just spell binding.

So much was said when Saurabh Raj Jain was roped in to play the lord Venkateswara. But let us tell you that no one could have played the role better than him. The way the young actor brings divinity to his character is superb and his chemistry with Nag throughout the film is just amazing. Anushka gets a good role and does decently well in her character.

Being a master filmmaker, Raghavendra Rao unveils the story of Hathi Ram Baba in a way that is very commercial and easily understood to all. The film is filled with superb visuals and Raghavendra Rao takes the film to another lever. Pragya Jaiswal looks gorgeous and plays her role well. Rao Ramesh once again does the villain’s job well. The climax of Om Namo is quite gripping and has been narrated on a very emotional note and will surely go down quite well with the family audience.

Jagapathi Babu’s character looks out of place and is the only disturbance in the film. His role and a song with Anushka should have been chopped off to make things better. The first part of the second half has some slow pace as thing get bogged down a bit.

Story wise, the film has similarities with Annamayya as the context here in Om Namo is also about a devotee. There are certain scenes where the emotions do not carry out well between Lord Venkateswara and his wives.

The film is super rich on the visual side. A special mention should go to the special effects team for showcasing Tirumala and the surrounding areas in top notch mode. Camera work is astonishing and brings a divine light to the film. Keeravani’s music and background score are supremely impressive and elevate the film completely. Editing is decent except for the Jagapathi Babu episode.

Coming to the director K Raghavendra Rao, he once proves that no one can beat him when it comes to making devotional films. His greatness lies in the way he narrates the story of less known Hathi Ram Baba in a way that would not be loud and bore today’s audience. The Nag-Raghavendra Rao combo once again clicks big time and proves that old is always gold.

When devotional films are considered to be a huge risk in today’s day and age, Nagarjuna and Raghavendra Rao take us on an emotional story of an ardent devotee in a simple yet entertaining manner. Nagarjuna gives an award winning performance as Hathi Ram Baba and holds the film completely. Breezy narration, good performances, and feel good scenes give this film a sacred feeling altogether. If you ignore the predictable story line of what happens in all devotional films, On Namo Venkatesaya is a film which will be loved the family audience.