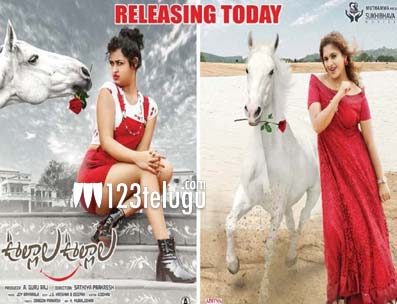 Ullala Ullala is a romantic drama that has made its way to the theaters today. The film is directed by Satya Prakash and let’s see how it is going to be.

Pandu (Nataraj) is an aspiring film director. On the other hand, Noori (Nooreen Sharif) falls in love with Pandu and keeps pestering him to get married. But Pandu wants a rich girl in his life so that he can settle down in life. This is the time when a character named Trisha (Ankita) enters his life. She sees her husband in Pandu and goes behind him in a crazy manner. In all this mess, Trisha’s husband comes back and creates an even bigger confusion. The rest of the story is as to how Pandu comes out of his problems and marries Noori.

One of the biggest assets of the film is Ankita’s skin show. The young heroine has gone bold and has crossed all boundaries and is a treat for the masses. Nataraj is decent in his role and does well for his first film. His bold scenes with Ankita have been executed well in the movie.

Prabhakar, who did the role of a lady villain was quite impressive. His body language and dialogue suited the film’s subject well. Prudhvi Raj and App Rao did their bit in the film along with the supporting cast. Some key emotions in a few scenes have come out well.

The BGM is so bad that you get irritated in many areas and look for the exit doors. The main theme of the film is just narrated with a few scenes in the climax and the rest of the film is just for silly scenes that have no meaning at all. The lead pair’s characters have also not been derived well as they keep taking their stance time and again.

Editing of the film is very bad as many scenes could have been chopped off. The production values of the film are very good and so was the camerawork. The dialogues written were good and so was the production design. The camerawork is decent but the music and BGM are horrible. Coming to the director Satya Prakash, he has worked hard to launch his son and does well in showcasing him. he also showcased the glamor part well but in all this left the emotions and key story of the film aside and made the movie a boring affair.

On the whole, Ullala Ullala has a few romantic scenes which will attract the frontbenchers. Apart from this, the film does not have a proper story, decent narration, basic screenplay and bores the audience throughout making it a terrible watch this weekend. Just Stay away from this romantic drama.