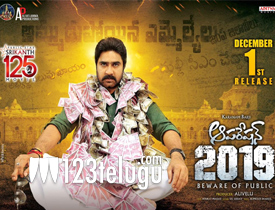 Srikanth has pinned a lot of hopes on his new film Operation 2019. The political thriller has hit the screens today and let’s see whether the film impresses or not.

Uma Shankar(Srikanth) is an NRI who wants to do something good for his native village. He comes there and makes a well-known person from his area to contest the elections. But to his bad luck, his candidate loses and this does not go well with Uma Shankar who slaps the winning candidate from the opposition party. This crime of his lands him in jail for one year. After coming out of jail, Uma Shankar decides to take revenge and uses all the possible methods to become an MLA during the upcoming elections. What is his mission? Why is he, power hungry? and what did he do with all the power is the rest of the story.

Srikanth is the backbone of the film and does a commendable job as the shrewd politician. He gives one of the best performances in his career and carries the film on his shoulders. Be it the serious scenes or the political satires which he mouths, Srikanth was very impressive.

The current political scenario in the country has been showcased well in the film. What all problems the people are suffering and how come the so-called authorities are neglecting the public has been shown in a good manner in the first half.

The pre-interval scenes have been designed in a good manner. Posani Krishna Murali was effective in his character and so was Deeksha Panth who did her role well.

The plot chosen by director Karanam Babji is good but his execution is below par. He starts off the film on an interesting note and sets the tempo of the political thriller aptly. But things get difficult from there on as the interest in the proceedings dies because of the wayward execution.

Srikanth’s flashback was disappointing and disturbs the flow of the film. Even though the interval bang generates a basic interest, things get bogged down once again post the interval. Cameos done by Manchu Manoj and Sunil do not create any interest at all.

There are so many silly scenes in the film like an MLA dominating the government and even making a CM dance to his tunes look outright silly. Because of all this, the proceedings take a beating.

Production values of the film are top notch as the political amosphere in the film has been created effectively by the production design and camera department. Editing by Uddhav is decent and so was the set work. Music by Rap Rock Shakeel is disappointing but his BGM as decent enough. Coming to the director Babji, he failed to make things interesting with his narration as a good script was wasted with his illogical and silly narration.

On the whole, Operation 2019 is an insipid political drama which lacks basic punch in the proceedings. Boring narration, unengaging twists and shoddy screenplay bring this film down in no time. Except for Srikanth’s sincere performance, this film has nothing going its way and is a good opportunity gone wanted during this crunch political scenario in the Telugu states.