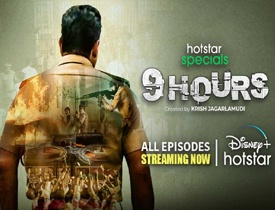 Continuing to review shows and movies on OTT, today’s pick is 9 Hours which has been written and produced by Krish. The show is streaming live on Disney Hotstar and let’s review it.

9 Hours is set in 1985. A few prisoners escape from jail and plan a series of bank robberies. While they succeed in the first two, the third robbery turns into chaos, and left with no choice, the robbers make the bank employees as hostages. A short-tempered cop played by Taraka Ratna enters the scenes and tries to handle the situation. How will he save everyone is the basic story of the show.

The show is based on the book Tommidi Gantalu, penned by Malladi Venkata Krishna Murthy. Krish has adapted it and set it up in the best way possible. The setting, production design, star cast, and visuals are quite realistic and give the show an engaging vibe.

The show is filled with noted actors and Taraka Ratna leads from the front. It is good to see him in a cop’s role and the noted actor does well in his limitations. But it is Ravi Varma and Sri Tej who get meaty roles and they do well as aggressive gangsters. The way each character makes an entry and their backstories also look sensible.

Ajay gets a very important role and he is amazing in his act. Madhu Shalini and Preethi Asrani are also neat in their characters. The hostage drama and the way suspense is built up look good in the series. The way the show has ended with a small twist is also handled well.

The series has nine episodes and after watching them, one gets a feeling that the story should have been ended in seven episodes straight. Though the story is narrated in a gripping manner, there are a few back stories that were not needed at all.

The climax is ended with a decent twist but it should have been explained in a more detailed manner. The character of Taraka Ratna is ended without any proper conclusion and this looks a bit over the top for the audience.

Also, the manner in which cops play a waiting game without attacking the goons looks fake in certain scenes. The cop setup is made to look weak just to enhance the hostage drama. If this aspect would have been narrated in a gripping manner, the output would have been great.

The series is produced by Krish and his production values are top-notch. The BGM, camera work, and visuals are realistic. The production design needs a special mention as the bank setup, and 80’s culture has been exploited quite well. The dialogues are neat and so was the whole costume design.

Coming to the director Jacob and Niranjan, they have done a decent job with the series. While they take a few cinematic liberties, they engage the audience most of the time. If they would have kept the runtime a bit less, the audience would have enjoyed it a bit more.

On the whole, 9 Hours is a hostage drama that has a few gripping moments. As noted actors play key roles, the series watching experience for the viewers becomes smooth. If you ignore the lengthy runtime, this web series ends as a passable watch this weekend.