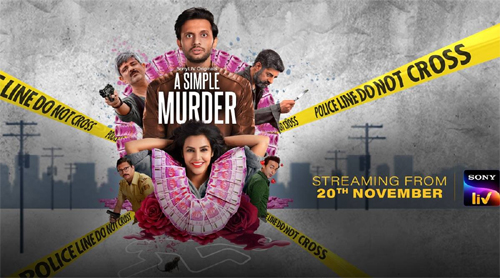 So, continuing the series of reviewing OTT shows and films, our today’s pick is the Hindi web series A Simple Murder. The series is available on Sony Live and let’s see how it is.

A leading politician’s(Yashpal Sharma) daughter is on the run and he hires a contract killer to kill his own daughter for betraying him. On the other hand, Manish(Zeeshan Ayub) is trying hard to make his start-up business click whereas his wife(Priyan Anand) is having an affair. Manish is somehow dragged into the contract killing. The twist in the tale arises when the wrong person gets killed. What will Manish do now with his already major issues in life. That forms the rest of the story.

Undoubtedly, it is Zesha Siddique who leads from the front. The way he goes about his stressful role was good to see. Zeeshan is superb in all the scenes of desperateness which bring him down in life most of the time. Priyan Anand gets a bold role and she essays it with a lot of ease. Yashpal Sharma and Sushanth Singh are very good in their supporting roles.

The dialogues in the web series are pretty interesting. The camerawork is very good and so was the background score. The build-up to the series and the initial two episodes are very interesting. Editing is neat and so was the production design. The small-time family set up and how couple’s take drastic steps to make money have been dealt with well in this series.

The series has a lot of voiceovers which is quite interesting. There is no special effect in the story as scripts like these have already been told in many films previously. The crime comedy angle is not dealt with well in spite of there being a good scope for it. The twists and turns in the show are not that great.

Also, the characters look superficial and forced in the latter part of the episodes. The ending is also quite predictable. There are many logical errors that go for a toss in the script which could have been taken care of to make the narration tighter.

On the whole, A Simple Murder is an old-school crime drama that has a familiar premise and routine narration. But it is the presence of noted actors and their impressive performance that makes things look okay to an extent. Give this a shot if you have absolutely nothing else to do.