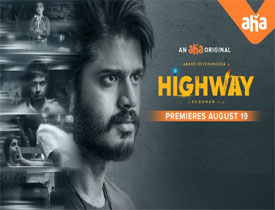 Anand Deverakonda has teamed up with the cinematographer-turned-director KV Guhan for the film Highway. The film was released directly on the OTT platform Aha. Let’s check how it is.

D alias Das (Abhishek Banerjee) is a psychopath killer who has committed 5 serial killings of women in the city of Hyderabad. It becomes a baffling mystery for the police since there is no motive for the murderer. Asha Bharath (Saiyami Kher) leads the investigation process. On the other side, we get to see Vishnu (Anand Deverakonda) who is a photographer by profession and starts to Bangalore on his job. We also see Tulasi (Manasa Radhakrishnan) living along with her single mother who both work in a poultry farm. As their boss tries to sexually assault Tulasi, she escapes from there. Coincidentally she meets Vishnu. Das also leaves the city as the police department intensifies the search. Did the police catch hold of the psychopath? How did Vishnu and Tulasi cross paths with Das? Watch the film to find out the answers.

There are three main characters in the film Vishnu, Tulasi, and Das. The initial 20 minutes are taken for the character introductions and they are established exceptionally well which helps the viewer to connect immediately. All three characters are well written. The story is interesting as it happens on a highway.

Anand Deverakonda is good in his role. In key scenes, he acted quite well and did complete justice to his role. Manasa Radhakrishnan makes an impressive Telugu debut. She emoted beautifully in emotional scenes. Her role required innocence and she did a fabulous job in this aspect.

Abhishek Banerjee is menacing and brutal as the psychopath. His performance is just top-notch and his solid portrayal as the antagonist gave the right balance to the film. He too makes a stunning Telugu debut. Saiyami Kher is decent in her role.

The narrative has good gripping elements and sequences that raise curiosity as to what happens next. The writing in certain scenes has been first-rate. The killer’s clever way of committing crimes, things infuriating the killer, and the linkage of the ending scene to that of the psycho’s characterization are examples of it.

The bonding between the lead pair happens all of a sudden within a very short journey. Even though Tulasi’s character is innocent, still something doesn’t feel natural about this.

The song in the first hour just disturbs the flow though it is good to listen to. The film slows down at times, especially in the mid-portions. At times the film gets predictable too. The VFX work at the end looks odd.

Few sequences seem inconsistent and lack a proper flow as the narrative keeps moving from the lead pair to the psychopath now and then. The cat and mouse game between the killer and police could have been depicted better.

The background music by Simon K King has added more depth and lifted the film to another level. The tense factor was felt through his music. He did a commendable job.

The editing could have been better regarding the improper flow in a few sequences. Venkat Talari bankrolled this project under the Sree Iswarya Lakshmi Movies banner and the production values are top-notch with no compromise made on the taking and visuals. They have given the film a rich feel.

On the whole, Highway is a decent crime thriller. The film has good writing, nerve-wrenching scenes that generate interest, and solid performances from the lead pair. On the flip side, a few artificially designed scenes, inconsistent portions, and predictable and slow narrative at places curtail the overall impact. If you love watching crime thrillers this film will be a satisfactory watch.