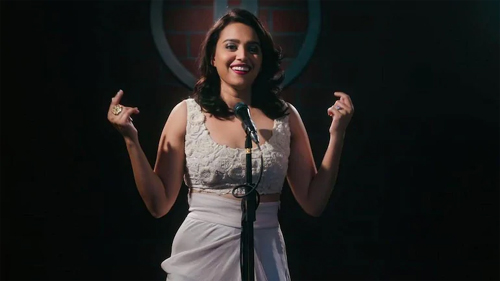 So, continuing the series of reviewing movies and shows, our today’s pick is the web series Bhaag Beanie Bhaag. Starring Swara Bhaskar, the series is available on Netflix. Let’s see how it is.

Beanie Bhatnagar(Swara Bhaskar) is a middle-class girl who is forced by her parents to do the routine chores of education, marriage, and kids. But Beanie wants to become a stand-up comedian. She does various gigs at a rookie-level but wants to make it big. Things take a U-turn when she breaks her engagement with Arun(Varun Thakur) and leaves her parents. How will a single and ambitious girl make it big in a unique field forms the rest of the story.

Swara Bhaskar is the major attraction in the web series. She holds the fort and gives a very natural performance. Her stand up comic acts is also well-executed. Swara played her role sincerely but the way she is portrayed in the latter part was not that good. Ravi Patel and Arun Thakur are good in their roles.

The comic timing of Swara is also pretty good. The production values and dialogues written need a special mention. Also, the way middle-class families blackmail their kids to follow them has been showcased well. Mona Ambegaonkar and Girish Kulkarni as Swara’s parents are impressive. Beanie’s looking out for the best man in life is handled well.

One of the biggest drawbacks of the show is the comedy. When you start watching a show about a girl who wants to become a top standup comedian, one would surely expect good comedy. But is missing big time in the series. The fun is forced in many areas and the seasoned comedians do no click in their crucial parts.

Though the dialogues click to an extent, the major fun part is missing. Also, the emotional aspect of the show goes downhill. The situations are made so tough for Swara that finding a solution for her life becomes so hard. That does not happen in normal life and this looks over the top in the show. Noted comedian, Dolly Singh is a misfit in the show. The writing is pretty weak and the flow of the show is not that gripping.

On the whole, Bhaag Beanie Bhaag is the story of a standup comedian that only clicks in bits in pieces. The so-called comedy does not click but Sawara Bhaskar with her flawless performance makes things strictly passable. Watch it if you have nothing else to do. But be prepared for a routine ride.