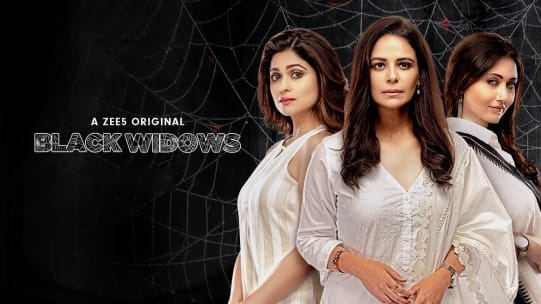 So, continuing the series of reviewing movies and shows, our today’s pick is Black Widows, the latest Hindi web series on Zee 5. Let’s now see how it is.

Three close friends played by Shamita Shetty, Mona Singh, and Swastika Mukherjee plan and execute the murder of their respective husbands as all three are fed up with the torture their husbands have been giving them for years. But somehow cops get involved and there begin tense times of investigation for these ladies. In such a time, the entry of Raima Sen, who has a connection with one of their husband turns the story upside down. The rest of the story is as to what happens to these friends and do they escape the cops for the murder of their husbands?

The setup and story look quite interesting and the manner in which things are unleashed in the first two episodes are quite good. Mona Singh is the best of the lot as he is the one who makes some sense in this noted cast who ham to the next level. The production values of the show are good.

Sharad Kelker was good in his role and Mohan Kapur was amazing as an abusive husband. But the best part is Parambrata Chakrabarty who plays the cop. At least he makes us believe in the part that he plays. The BGM is good and so was the production design. Some domestic violence scenes have been shown well.

One of the biggest drawbacks of the show is the pathetic narration. There s absolutely no seriousness in the show and this because of the director’s execution. Three wives killing their husbands and trying to escape the law looks good on paper but is showcased in a silly manner. Shamita Shetty makes a comeback and it is hard to understand how she even did a role like that. She hams to no extent and is loud in her role.

The logic goes for a toss and the key twists are also predictable. The characters have no weight at all in the show as the main leads have not been established well. The flow in the series is not proper and so many illogical scenes create a bad impact on a show. In a way, you can say that a very good story is spoilt by a bad direction.

On the whole, Black Widows is a series that has a good story but bad direction and over the top action spoils the fun completely. Except for the basis twist part, this series ends as a disappointment for the viewers. Skip this one.