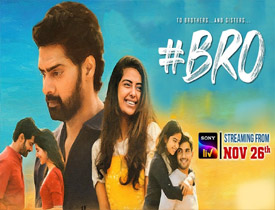 Naveen Chandra and Avika Gor starrer BRO is available for streaming on Sony Liv now. The film skipped theatrical release and premiered directly on OTT. Let’s see what the film has to offer.

Madhav(Naveen Chandra) is sent to Saudi Arabia at a very young age to work as a labourer by his parents so that his income can be used to cover the medical expenses of his terminally ill sister, Subbu(Avika Gor). But things take a turn for the worst after Subbu passes away. What happens later forms the rest of the plot.

The film banks on the fine performances from the lead cast. Naveen Chandra and Avika Gor deliver natural performances. Naveen as a grumpy brother who goes through various hardships to fund the medical expenses of his sister comes up with a good act. Avika delivers a good performance as well.

Next come the aesthetically appealing visuals. The cinematographer Azim captures the visuals of the picturesque rural landscapes with great conviction. The visual storytelling is very good. The film is strong on the technical front.

While the premise is fresh and novel, the narrative isn’t compelling enough. The show-paced screenplay doesn’t help the cause. The brother-sister track starts off well, but it turns monotonous after a point. The ‘bro’ ‘bro’ conversations between them become a tad annoying beyond a point.

Needless to say, the film doesn’t cater to all sections of the audience, given its new-age theme. The story isn’t rounded off very well towards the end. The film is a remake of a Malayalam film titled Koode and for those who’ve watched the original, the Naveen Chandra starrer might not make for an as compelling watch.

The film is directed by New York Film Academy alumnus, Karthik Thupurani and he tries to come up with something new for the Telugu audience. The storyline is fresh but the narrative is not so engaging. The background score is good. The real standout is the cinematography. The beautiful locales are showcased very well.

BRO is more of a coming of age film and it has a feel-good vibe. The brother-sister track is fresh. But the narration is way too slow to make for a compelling watch. The film progresses along on a predictable note from the start till the end. It makes for underwhelming watch.