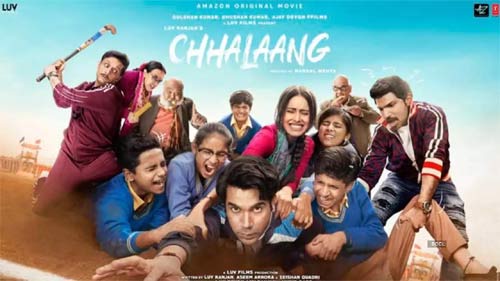 So, continuing the series of reviewing OTT shows and films, our today’s pick is the Hindi film Chhalaang. The series is available on Amazon Prime and let’s see how it is.

Montu(Raj Kumar Rao) is a lazy fellow who gets the job of a PT teacher only because of his dad’s recommendation. He does not take his life seriously and is always after the computer teacher of the school (Nusrat Barucha). Things change when the principal appoints a better PT teacher(Zeeshan Siddique). This changes the popularity of Montu in his school who now wants to pin down the new PT teacher. So he takes him head-on with three deadly tasks. Will Montu be able to win a life-changing competition is the story.

Roles like these are a cakewalk for Rajkumar Rao. He as the witty PT teacher does well. His simple look, comic timing, and negative shades in his character have nicely been exploited in the film,. Rajkumar also shares good chemistry with Nusrat. The noted heroine does not have much to do but impresses in a few scenes.

The supporting characters played by Satish Kaushik and Saubah Shukla are superb. The seasoned actors bring a lot of depth to the film. The writing is good as the small town mentalities have been nicely showcased. How small-time petty issues become big in schools is dealt with nicely. The music is okay but the BGM was good.

The climax could have been even more engaging. There are no major twists and turns in this film as the story is simple and on point. The sports activities showed should have been planned well. The romantic angle is quite weak and disturbs the flow of the film. The main character Zeeshan is not given much weight and this makes the conflict point dull in many scenes.

On the whole, Chhalaang is a routine sports drama that has nothing new to showcase. But the solid performance of Rajkumar Rao and the decent narration makes things interesting. If you like stories set up in small towns with earthy emotions, give this film a shot. Rest can take it easy.