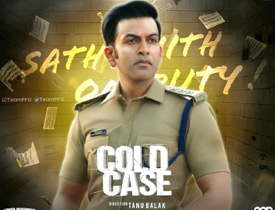 Following a series of paranormal incidents, a fisherman finds a human skull wrapped in a trash cover. Local ACP Sathyajith(Prithviraj Sukumaran) takes over the case and starts digging deep to track down the criminal behind the mysterious murder. The rest of the story deals with police procedural investigation and an interlaced horror element linked with the case.

The film features 3-4 acclaimed Malayali actors in the lead roles including Prithviraj Sukumaran, Aditi Balan, Anil and others. They shoulder the film with their excellent performances.

The core plot of the film deals with a mysterious homicide and the consequent horror element surrounding it. The premise is potent and the idea of blending investigative thriller with horror looks fresh.

Simplicity is the ultimate sophistication. The director of Cold Case, Tanu Balak should take a cue from this phrase. He tries hard to infuse horror, drama, suspense and other elements into his narrative and ends up overcomplicating the main plot. The premise looks promising but unnecessary subplots mess up the tempo of the proceedings.

While the first half has a few intriguing moments here and there, things turn monotonous and bland in the latter half. The big reveal towards the end looks artificial. The build-up to the climax isn’t convincing either.

Background score and cinematography are top notch and they stand as the main assets of the film. Editing could have been better. Quite a few scenes in the latter half are unnecessarily stretched out. Production designing is impressive.

Cold Case is a poorly articulated whodunnit mystery that fails to hold the attention of the viewers all the way through, despite its interesting set-up. Prithviraj delivers a fine performance and a couple of scenes in the first half rake up the curiousity factor. But the tempo keeps dropping every now and again which is a big no-no for suspense thrillers.