OTT Review : In the Name of God – Telugu series on AHA 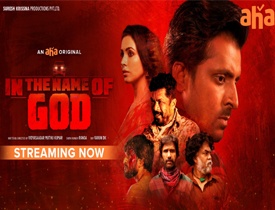 In the name of God is a web series that has created a lot of buzz with its trailer. The show is finally live on AHA and let’s now see how it is.

The story is set in Rajahmundry and is about Aadi (Priyadarshini) whose dream is to buy a resort. He is also attracted towards Meena (Nandini Rai) who is the young wife of Ayappa (Posani). One fine day, Meena lures Aadi to do a favor for her and without knowing the circumstances, Aadi says okay. The twist arises when Ayappa gets killed and Aadi gets involved in the murder. This is also the time a dreaded gang is after a money bag which Ayappa has. Who killed Ayappa? Will Aadi gets out of his troubles? and what is this whole money bag about? To know this, you have to watch the show.

The story of the show is quite interesting and is set nicely in an intriguing premise. The crime angle and the motto behind the whole drama are set up clearly by the director in the first two episodes. The way Priyadarshi’s character gets involved is showcased well during this time.

Priyadarshi has become a go-to actor when it comes to playing the underdog roles. He is superb as Aadi and is the main attraction of the show. If not for Priyadarshi, the show would have been quite dull. The young actor showcases lust, jealousy, and fear superbly and does his role impressively.

Nandini Rai is also impressive in her role which has good scope. The naughty side to her and the wicked thoughts behind the character, Nandini has showcased well. Mohammad Ali Baig, the theatre actor of Hyderabad is very good in his negative role. He gives an edge to the show. The actor who did the role of Thomas was also quite impressive with his restless attitude.

One of the biggest drawbacks of the show is the cuss words. For every two lines, the show is filled with cuss words. The actors mouth so many bad words that even men can get uncomfortable after a while. This is a big drawback apart from the BGM. Such crime stories are elevated big time by the music score but in ING, that is missing totally.

Once the fourth episode starts, things fall like a pack of cards. The screenplay goes for a toss and so many weird characters are introduced for no reason. The grip is missing from the show as the thrill of what happened to the money bag is missed.

Each character is shown way too much in detail which was not needed. The narration slows down and the last episode is rushed for no reason. Also, after facing so much like a coward, Priyadarshi comes back so strong which looks a bit odd.

The production values of the show are impressive. Credit should surely go to the camera work as it showcases the locations superbly. The color texture used suits the mood of the show well. Also, as said the dialogues look odd. The editing is dull as the show is filled with so many repeated scenes. The production design is quite good.

Coming to the director Vidya Sagar, he has his script written well on paper but the way he narrated the show was half-baked. There is a curiosity factor in the show which is held only for a while and once the show heads to the middle parts, the show fizzles away with dull moments.

On the whole, In The Name of God is a half-baked thriller that starts off quite well and ends on a disappointing note. The show has a good premise, solid performances by Nandini Rai and Priyadarshi but is dragged in the last few episodes. Adding to this, the cuss words do not help matters much. If you like crime thrillers, give this a shot but there is nothing worth thrilling in this show.