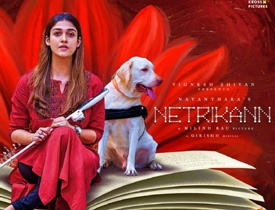 Starring Nayanthara in the lead role, Netrikann, a Tamil remake of Korean film, Blind is streaming on Disney+ Hotstar now. Here’s our review of the suspense thriller.

Durga (Nayanthara), a visually challenged ex-cop is the prime witness in a hit-and-run case. However, further investigation reveals that the man accused in the case is a serial rapist. Can Durga, with help from a sincere cop Manikandan nab the criminal? If yes, then how.

Seasoned actress Nayanthara plays a visually challenged ex-cop in the film and she shoulders the film with her appreciable performance. The way she portrays a blind woman is of the very best quality. She is ably supported by the support cast, which includes Ajmal Ameer, Manikandan, and others.

There is this one particular sequence in which Durga is forced to come up against the antagonist. It is shot in a metro train and shopping mall backdrop. This sequence is a standout in the film. The very last scene in the film has good emotional connect and it creates a good impact.

Netrikann gets off to a slow start and it takes a good 30 minutes to get into the actual story. The scenes which are intended to establish the leading lady’s visual impairment are bland. These scenes lack impetus.

Just as the story picks up the pace ahead of the pre-interval block and hits top gear with the interval sequence, it almost instantly loses the steam as the second half sets in. The film again progresses on a predictable note until the pre-climax. There is a fair bit of action in the climax but it doesn’t excite or engage the viewers.

The director Milind Raju adapts Korean thriller Blind and he changes the script to suit the sensibilities of native audiences. He does infuse a few commercial elements and extracts the best of Nayanthara. But his narration is way too uneven. The film progresses on a predictable note for most parts, which a big no-no for a suspense thriller. Background score is riveting and sets the right mood. Cinematography is good as well.

Netrikann has its bright moments in either half but loses momentum on way too many occasions. It progresses on a predictable note in the latter half and the climax doesn’t offer anything of substantial value either. With a better screenplay and tightly-packed narrative, the film might have made for a better watch.