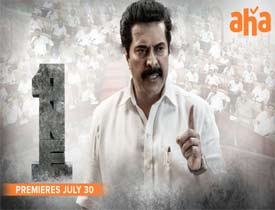 The Telugu dubbed version of Malayali superstar Mammootty’s political thriller, One is streaming on Aha Video. Here is our review of the film.

Plus Points: There is no debating the fact that Mammootty is one of the very best actors in Indian cinema. He oozes class in every frame and his composed performance propels the entire narrative.

The storyline might seem farcical at first, but the way it has been justified is impressive. The film is a raw take on modern day politics, albeit in a dramatised manner.

The scenes related to the internal conflict within the chief minister’s party are way too typical. These sequences go on for at least 30 minutes and they have zero freshness. A better subplot should have been incorporated to make things more intriguing and engaging.

The ending portion is a bit cliched and it is easily predictable. The viewer can easily guess what is about to happen in the last 20 minutes of the film. The film gets a happy ending, but a more imaginative closure would have worked very well for the film.

Santhosh Vishwanath picks a novel subject but his narrative is predictable on more occasions than one. But he does manage to hold the attention of the viewers for most parts. Gopi Sundar’s background score is a big asset to the film. His protagonist-elevating BGM is of top tier quality. Cinematography is excellent.

One is a moderately gripping political thriller that has a rather unique plot. But the screenplay and narrative is predictable at times. Mammootty stands out with his winning performance. You can give the film a watch if you a tad too much spare time.