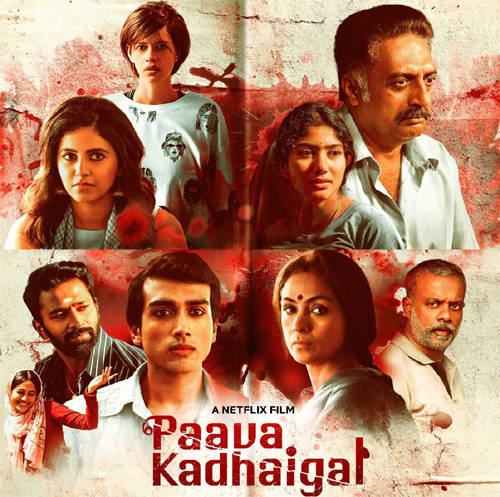 So, continuing the series of reviewing movies and shows, our today’s pick is Paava Kadhaigal, the Tamil anthology film. This film is available on Netflix and let’s now see how it is.

This anthology film has our stories directed by Sudha Kongara, Vignesh Shivan, Gautam Menon, and Vetri Maran. The Sudha Kongara story deals with the life of the transgender Sattar(Kalidas Jayaram) who is looked down on by his own family. In the second story directed by Vignesh Shivan, honor killing is the main aspect and deals with the story of two twin sisters played by Anjali. In Gautam Menen’s story, his own daughter gets raped at the age of 12. Finally, the last short directed by Vetrimaran is about how a father kills his own pregnant daughter(Sai Pallavi) for his honor and prestige

Paava Kadhaigal is undoubtedly the best-made anthology series so far in the country. The stories deal with rape, honor killing, and taboo subjects in society and have been narrated in a riveted manner. The emotions are so strong that leave a deep impact on you even after you are done watching the film. Tamil cinema’s finest directors narrate four stories that are contemporary and have superlative performances.

Kalidas Jayram as the transgender kills it with his adorable act. His emotions and the way he showcases his body language was amazing. Anjali is superb in her bold role and gets to showcase different aspects of her twin role. In Gautam Menon’s story, the once glam Simran plays a doting orthodox mother with aplomb. Gautam Menon himself plays the husband and the way the couple deal with the rape of their daughter is showcased so well with moving emotions.

But the best of the lot is the story of Prakash Raj and Sai Pallavi that is directed by Vetrimaran. Sai Pallavi gives one of her best performances as a pregnant lady whose father kills her by poisoning her. The drama, emotional outburst that Sai Pallavi gives was too good to see. Prakash Raj as the menacing father who does not show anything on his face was another asset. The songs of the film are too good and so was the BGM. The camerawork, production values of all the stories was on point.

There are not so many drawbacks in this film as an episode is nicely packed. Gautam Menon looks a bit war in showcasing some emotions in the film. His expressions could have been better in key scenes. Also, in Sudha Kongara’s story, Kalidas’ love for hero Shantanu Bagyaraj should have been showcased in a better manner. This would have helped to establish the story even better.

On the whole, Paava Kadhaigal is one of the best films in recent times. Each short story in this anthology deals with strong subjects and evoke moving emotions and questions human integrity. Upon this, the mesmerizing performances and finest narration by top directors make this film a must-watch. Don’t miss this one.