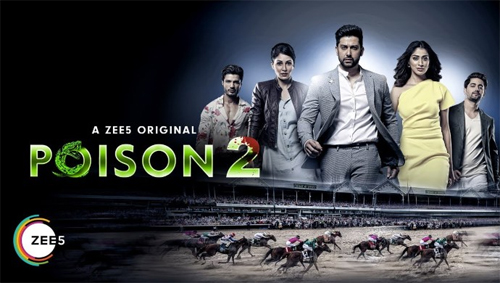 So, continuing the series of reviewing OTT shows, our today’s pick is the second season of the Hindi web series Poison 2. The series is available on Zee 5 and let’s see how it is.

Sara(Rai Laxmi), Harshvardhan (Zain Imam), and Oscar (VinRana) co-own a race club in Goa which is running into losses. One fine day, Oscar is fired for mishandling funds from the company. This further takes the company down in no time and in comes the suave Aditya Singh Rathore (Aftab Shivdasani) who rescues the company with a crazy business proposal. Sara okays it but this does not well with Harsh. Oscar on the other hand feels there is someone behind all these mishaps. Who is Aditya? Why did he offer to save the company and is there a back story behind this? That forms the story.

Rai Laxmi gets a meaty role and she has done a wonderful job. Be it her looks, acting talent, glamor dose, Rai Laxmi has taken things a notch higher. Aftab gets a key role and he leads from the front. Though he is not the same as before, he still is the best in this show.

Asmita Sood is amazing in her role and brings a good vibe to the series. The series is all about cheating, revenge, deceit, lust and all this has been established well in the series. When compared to the first season, the second season has better drama and visuals.

The twists showcased through the series are decent and have been executed well. The best part of the web series is that it is shorter in duration and does not take a toll on you. The making is good and the dialogue is from the typical 90’s movies filled with punchlines.

The emotional quotient in the series is a bit dull. There is no seriousness in some characters as loyalties change just like that in three or four scenes. Too much emphasis is shown as to how people have become corrupt in today’s time and can go to any extent for money.

The series is filled with twists but some of them are a bit predictable especially in the fifth and sixth episodes. The logic goes for a toss as crimes are committed just like that which looks a bit over the top.

On the whole, the second season of Poison 2 is a stylized drama that has a very interesting setup. The twists showcased and performances keep you hooked. But the emotional quotient is dull and there are few logics that go for a toss. If you are the one who loves Abbas Mustan kind of films filled with lies, backstabbing, and masala filled thrills, this one is for you.