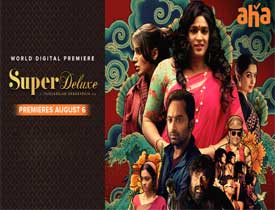 Super Deluxe, a dark comedy featuring Vijay Sethupathi, Samantha, Fahadh Faasil and others in important roles is dubbed and released in Telugu. Here’s our review of the film.

Four individuals, Vijay Sethupathi, Samantha, Fahadh Faasil, and Ramyakrishna have to come up against their worst fears on a fateful day that changes their lives for good.

Super Deluxe mostly banks on the authentic dark comedy that is evoked by the strange situations the lead characters find themselves in. The film also touches various social stigmas and taboos.

The stellar performances from the lead cast is the main asset of the film. Vijay Sethupathi, Samantha, Fahadh, and Ramyakrishna deliver excellent performances and they shoulder the film. The support cast, including Ashwanth, Mysskin, Bhagavathi and others come up with winning performances as well.

Super Deluxe narrates four parallel stories and the way all these tracks have been rounded off towards the end is brilliant. The build up to the big climax and the way the film us ended are riveting.

While the story might seem to be an engaging one for a section of the audience, the others might find it a bit to alienated. The film does have commercial appeal to an extent, but doesn’t cater to all sections of the audience.

There is this one particular subplot pertaining to an idol and a priest, which turns monotonous beyond a point. These scenes should have been partially chopped off. Also, the film has a run-time of close to 3 hours which again doesn’t sit well with all sections of the audiences.

The directir Thiagarajan Kumararaja picks a novel plot and narrates it in the most organic way possible. Yuvan Shankar Raja’s background score gels with the theme and elevated certain scenes. Cinematography is of top notch quality. Production designing is exquisite as well.

Super Deluxe is a dark comedy that keeps the viewers engaged for most parts, despite a few hiccups in the middle. It is powered by stellar performances from the lead cast and an emotionally engaging core plot. It can make for a good watch if you love dark comedies.