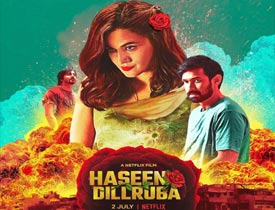 Continuing the trend of reviewing, films and shows on OTT, our today’s pick is Taapsee’s Haseen Dilruba that is now out on Netflix. Let’s see how it is.

The film is set in Jawalpur. Rani(Taapsee) is still reeling from her bad breakup and is forced to marry a simple middle-class engineer Rishu(Vikrant Massey). The couple finds it very hard to gel and this upsets Rani big time. Then enters Neel(Harshvardhan Rane), the cousin of Rishu. Within no time, Rani gets attracted to him and has an affair. This upsets Rishu but he accidentally gets killed in a blast. The cops start an investigation and suspect Rani due to her affair with Neel. Who killed Rishu and what happens to Rani is the story.

The film has a story by Kanika Dhillon and she writes a good script with a crazy ending. The premise is also good and the problems between the lead pair are shown so well. Taapsee has started to master playing different roles in her career. She as Rani is good in most parts but also overdoes in some areas.

Harshvardhan Rane is perfect in his role as a guy who woos Taapsee. But the real star of the film was Vikrant Massey. He as Rishu is solid. The manner in which he showcases lust, deceit, and helplessness was so good to see. One can say that he dominated Taapsee in many areas and is the mainstay of the film.

The last 20 minutes of the film are solid and the twists showcased are also impressive. The chemistry between Taapsee and Vikrant is pretty good as well. The manner in which the film sets the goals of the couple right in crunch time is also shown well.

Haseen Dilruba has some good moments but that does not mean it is not having demerits. The whole cop investigation into the murder case looks over the top. A better actor for the role of a cop should have been chosen. The investigation plays a major role and this is also a big drawback as it does not create any impact. How Taapsee is treated by the cops and how they suspect her is shown in a weird manner.

There is no grip in the proceedings when all this happens and the film starts looking out of place. The writing is quite weak and some more tense scenes should have been brought in to showcase the thrill in the film.

The film lacks pace in the first half as routine family scenes could have been edited out. Also, one more drawback is the way Taapsee’s role is etched. Sometimes, she is shown in a negative manner and sometimes she is good. This makes her look odd in the film.

Haseen Dilruba is quite good in technical aspects. The locations shown, camerawork, and dialogues are superb. Music is also good but the BGM could have been better. The film needed to be trimmed by more than 10 minutes. Coming to the director Vinil, he has done a passable job with the film. While he showcases the thrill factors superbly, the rest of the cop investigation is dull and disappointing.

On the whole, Haseen Dilruba is a film that has an intense premise. The film is good and has a thrilling last half an hour. But there are a few logics that go for a toss in the murder mystery. If you ignore the investigation angle, the film makes for a passable watch for Vikrant Massey’s solid act.