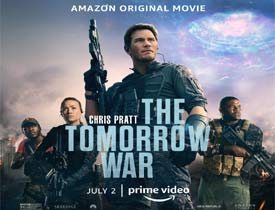 Amazon Prime Video’s latest outing, The Tomorrow War, starring Chris Pratt is available for streaming now. Here is what we felt after watching the action thriller.

Dan Forester(Chris Pratt) is drafted to fight in a future battle which could potentially decide the fate of the human race. But little does he know that the mission that he sets out on demands a personal sacrifice. What is the sacrifice that he is forced to make? The answer to this question forms the remaining plot.

The biggest asset of The Tomorrow War is its visual presentation. VFX and CGI are extensively used to enhance the action blocks and the quality of the computer generated graphics is top notch. The atmospherics are visually compelling as well.

Chris Pratt, Yvonne Strahovski and Sam Richardson come up with splendid performances and they set the tone with their portrayals of the seemingly complex characters.

While the action and atmospherics are presented on a larger-than-life scale, the key elements of storytelling are left to air. The emotional angle related to the protagonist and his future daughter looks feigned and melodramatic.

The screenplay and narrative are a bit too complicated as time travel and teleportation theories are infused into the core plot. A section of native audiences might find the film a bit too ‘technical’ for their liking.

The alien invasion thread looks compelling at first but it loses steam after the midway point and what follows later is a goofy catch-the-monsters action-oriented tale.

The writing is subpar as a better emotional thread could have worked very well for the film. VFX and CGI offer an otherworldly experience. Editing is patchy. The tempo keeps going up and down all through the course of the film.

The Tomorrow War is essentially an alien invasion thriller but it takes too many detours as poorly executed subplots take the centre stage. While visual grandeur and the performances from the lead cast are the two positives of the film, screenplay, conflict point and the emotional thread are its demons.