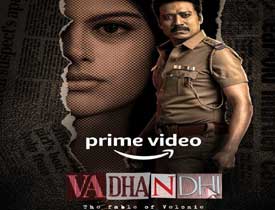 Currently, it is thrillers season, and Amazon Prime Video has dropped a new thriller series titled Vadhandhi: The Fable of Velonie. The series stars SJ Suryah and Sanjana in crucial roles. The series is streaming on the OTT platform, and let’s see how it is.

In a film’s shooting location, a young girl’s dead body is found, which is misinterpreted to be the film’s heroine. However, very soon, the police discover that it is Veloine (Sanjana) who died and not the heroine. S.I. Vivek (SJ Suryah) handles the case and finds it difficult to solve it due to confusing leads and rumors that sprung up post-Veloine’s death. The rest of the series is about how Vivek solved Veloine’s murder mystery.

This is a whodunit thriller, and the suspense is nicely maintained from the start to the end. Moreover, the brilliance in writing is such that we doubt every character presuming to be behind Veloine’s death. Every character behaves peculiarly, causing suspicion to the police department, and hence the thrill element succeeds.

A strong message is delivered with the show, which is the character assassination of women in the modern-day world. This message is well delivered and is about people who point out women about their choices. A few characters occasionally come and go in the series through whom the director conveyed this point firmly.

Many characters ably supported the plot. SJ Suryah is so effortless with his performance and is a delight to watch. We all know he is a versatile actor, and he plays the cop role to perfection. Sanjana, who played the titular role is brilliant. She portrayed the emotions nicely, and her role was very well written.

Nasser, as a writer, is good in his role, and Laila did well as Sanjana’s mother. Others like Vivek Prasanna, Hareesh Peradi, and Smruthi Venkat are adequate in their roles. The twists are well executed, and mainly last few episodes are racy. The way a certain section of media behaves is well-depicted.

The biggest drawback of the series is its lengthy runtime. The editing team should have reduced the length to enhance the impact. At times the series becomes tiresome due to some prolonged sequences. Moreover, the narrative is very slow in the initial episodes, and the proceedings fall flat. Hence audience would feel a bit bored, and a fast screenplay here could have made more difference.

The excessive usage of English in the series might not go well with a section of the audience. In addition, there is a bit of sexual content and more violence in the show, which might disturb a few. The family angle of SJ Suryah’s character should have had more depth to elevate the drama.

Simon K King’s background score is great and intensified the proceedings. The cinematography by Saravanan Ramaswamy is solid, and the forest portions are superbly shot. However, the editing, as mentioned, should have been crispier. The production values are great, and Pushkar & Gayathri’s touch is seen in the series. The Telugu dubbing is good too.

Coming to the director Andrew Louis, he did a decent job with the series. The story is compelling, and the various subplots are nicely woven into this murder mystery. But the director should have taken more care about the pacing of the first few episodes and the runtime, which mitigated the overall feel. Andrews got a perfect cast, and he extracted solid performances from them.

On the whole, Vadhandhi: The Fable of Veloine is a decent whodunit thriller with a good message. The brilliant performances and the way the director holds the suspense are positive factors. But to enjoy the show, one has to go through a slow pace and lengthy episodes. Those who love watching crime thrillers can give it a shot.