Review : Oxygen – Shines here and there 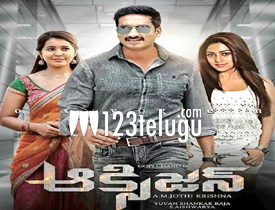 After getting postponed many a time, Gopichand’s Oxygen has finally hit the screens today. Let’s see how it is.

The story is set amidst two faction groups which are headed by Jagapathi Babu and Sayaji Shinde. Both these family are gunning for each other all the time. This is also the time when Jagapathi Babu’s daughter(Raashi Khanna) gets engaged to Aravind Krishna(Gopichand). When everything seems to be going fine, half of Jagapathi Babu’s family gets killed by an unknown suspect. Who is this suspect? What does he have to do with the family? and What role does Aravind Krishna play in all this? To know the answers, you need to watch the film on big screen.

The basic story idea of the film is pretty good. The way the suspense element is brought into the proceedings at half point has been executed well. Interval bang is quite surprising and has been showcased quite grippingly. Raashi Khanna does her part well and is a good support to Gopichand.

Hero Gopichand is an apt choice for the film and his performance in the second half is quite impressive. He is good in the action department and carries the film on his shoulders.

Anu Emanuel does a great job in her role. Not only does she look good, but Anu has also performed well in emotional scenes during the second half. Even though the climax is lengthy, the twist in Jagapathi Babu’s role makes things interesting.

One of the biggest drawbacks of the film is that it is painfully long. Director Jyothi Krishna takes forever to narrate the simple storyline. You feel that you are watching three different films in one movie as the episodes are quite mundane.

The screenplay takes a beating and this is where the film drops. The makers should have edited the film by at least fifteen minutes and come to the point right away so that the interesting storyline would have looked good.

The entire first half goes for a toss. Unnecessary comedy and family scenes eat up most of the time in the film, Except for the interval bang, rest of the first half falls flat.

Production values for the film are pretty decent. Yuvan Shankar Raja’s music is decent but his background score was even impressive. Dialogues were neat and so was the simple yet captivating camerawork. As said earlier, editing was pathetic as at least 20 minutes should have been chopped off.

Coming to the director Jyothi Krishna, his script on paper is pretty good but his execution is mediocre. Episodes wise, the film is good in bits and pieces. A very good emotional episode is followed by some stupid scenes which drag the film aside. Had the director written his screenplay well, things would have been quite interesting. But it feels like a good point is dragged for over two and half hours.

On the whole, Oxygen is a film which has a good concept but is sidetracked by some very mediocre direction. The film is painfully long and this can test your patience at times. If you are able to sit for over 2 and half hours and adjust with the uneven narration, then some interesting twists, interval bang, and a few action elements enable you to give this film a shot this weekend.