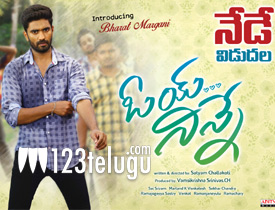 Continuing the trend of low budget films, yet another romantic entertainer which has hit the screens today is Oye Ninne. Let’s see how this film turns out to be.

The story of the film is based on the lives of Vishu(Bharath) and Ammulu(Shrusti Dange). Right from their childhood, they grow up together and share a love and hate relation. Love blossoms between them when Ammulu’s marriage is fixed with someone else. What will Vishnu do now? How will the couple realize their love for each other? Will Ammulu get married to someone else? and how does Vishnu win his love? That forms the rest of the story.

Even though the concept is quite old, the narration by the director is decent. He nicely showcases the hate relationship between the young couple and evokes decent performances from the supporting cast.

The way the film has been set up in a small town looks apt. Some family emotions showcased in the film have been executed well. Even though it is his first film, hero Bharath does a decent job and will surely improve with time.

Nagineedu gets a decent role and does his best to it. Comedian Satya is the mainstay of the first half and evokes decent comedy during this time. Heroine Shrusti looks okay and also emotes well.

After narrating the first half decently, the director loses grip and makes the film go haywire. Once the lead pair realizes their love for each other, it takes ages for the film to wrap up and many boring and silly scenes kill the interest in the film.

The pre-climax is dragged out unnecessarily and has no aim at all. An unnecessary villain angle and comedy set up makes the film look over the top. Also, the story is quite predictable and does not have many twists.

The chemistry between the lead pair is completely missing as the basic bonding and love between the couple have not been elevated at all.

Production values of the film are very good. The small village set up, simple relationships and also the lovely atmosphere have been nicely showcased by the cinematographer. Music and background score of the film is also decent as two of the songs sound good. Editing during the second half is quite weak as at least ten minutes of the film should have been chopped off.

Coming to the director Satyam, he shows promise in his narration. Even though he chooses a routine story, the way he has executed the film in the first half is impressive. But he too falls for the commercial angle and unnecessarily drags the film after a point. Had he added an interesting twist and wrapped up things nicely, the output would have been somewhat better.

On the whole, Oye Ninne is a film which starts promisingly but is killed by some lazy narration during the later part. Lack of depth in the lead pair and dragged scenes during the second half makes things routine and boring. All those who like village love stories can give this film a shot but the others can take it easy and do something else interesting.