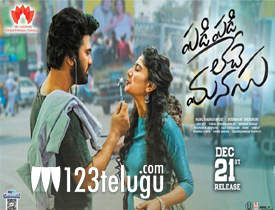 Padi Padi Leche Manasu is one film which has been promoted on an aggressive note from the past few weeks. The film has released amidst other interesting films likes KGF and Antariksham. Let’s now see whether the film lives up to all its expectations or not.

The film is set in Kolkata and is based on the lives of Surya(Sharwanand) and Vaishali(Sai Pallavi). The couple fall in love and enjoy life like there is nothing more important. But a small argument leads to their break up. Things become even serious when one of them goes through life threatening issues. What is the problem between the couple? What are the issues that they go through? and how do they get back together forms the rest of the story.

The setting of the love story is perfect as the Kolkata visuals add a good depth to the proceedings. Sharwa is quite lovable as Surya and showcases good depth in his performance. The way he showcased emotions in key scenes speaks volumes of his talent.

Coming to Sai Pallavi, she has an equally important role like Sharwa and does well in the first half. The chemistry between the lead pair is cracking as both the actors make you believe that they are the eternal lovers.

Director Hanu Raghavapudi has extracted good performances from the lead pair and he executes the love story in an interesting manner in the initial part of the film. Murali Sharma, Sunil and Priyadarshi make their presence felt. Vennela Kishore impressed in whatever time he was there on screen.

One of the biggest drawbacks of the film is that it is very slow and takes a lot of time to come to its conflict point. After starting the film on a good note in the initial stages, Hanu runs out of ideas and the story just moves from here and there until the pre-interval scenes come in.

The conflict point is good and the manner in which they are forced to break up also looks decent. But from there, the film takes a new angle and this is where the second half goes down. The love story lacks the conviction and does not look convincing in many scenes.

Logic also go for a toss and the manner in which Sai Pallavi and her problems are showcased and why she avoids the hero look forced and are not needed in the set up.

Music of the film is very good and that saves the film in many areas. Background score by Vishal Chandrasekhar is amazing. Camerawork is just stunning as the Bengali vibe has been nicely showcased through beautiful visuals.

Dialogues are meaningful and so were the lyrics of the song. The film needs serious editing as at least 20 minutes in the film can be edited out. Sharwa has been styled quite nicely in the film.

Coming to the director Hanu Raghavapudi, he has done just an okay job with the film. He had a decent line in his story but his execution was wayward. He has made the film lengthy and complicated for no reason in many places. But he has shown the chemistry between the lead pair in a decent manner and that is the strength of the film.

On the whole, Padi Padi Leche Manasu has a very good first half and becomes dull in the second. The slow pace and dullness in the love story plays spoil sport in many areas but the chemistry between the lead pair is sizzling and that is enough for the film to be given a shot this weekend. Just go in with minimal expectations.