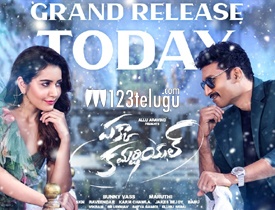 Gopichand’s Pakka Commercial is one film that has been promoted a lot in the last few days. Directed by Maruthi, this film has hit the screens today. Let’s see how it is.

Satyanarayana Murthy (Satyaraj) is a very sincere judge who resigns from his post after announcing a wrong verdict. Cut to the present, his son Lucky(Gopichand) is a greedy lawyer who only works for money. After knowing that his son is taking up a case to help a criminal politician,(Rao Ramesh) Satyanarayana makes a comeback as a lawyer to face his son. Who will win this father and son battle is the story of this film.

Maruthi is known to take trending subjects and keep them as backdrops of his films. Here, he takes the angle of people being commercial and doing things for their own benefit. He takes this angle and sets up a variety role for Gopichand which looks quite good.

Gopichand looks extremely handsome and has been styled well. He suits the character perfectly and gives a settled performance in the film. His comedy timing has also been used quite well by Maruthi.

Raashi Khanna is one of the major attractions in the first half and gets a good role. She tickles the funny bone with her hyper role and also shares good chemistry with Gopichand. Ajay Ghosh is superb in his limited role.

Rao Ramesh is great as the main villain and evokes good laughs along with Ajay Ghosh. His body language and dialogue delivery suit the mood of the film. Satyaraj gets a meaty role and does what is expected of him. Viva Harsha, Saptagiri, and Siya Gautham are okay in their roles.

Firstly, the major drawback of the film is its routine story. There is absolutely nothing new that is showcased in the story. Also, the actual story kick starts only during the breakpoint.

Though there is a passable comedy, Raashi Khanna’s character is overdone after a point and it looks silly in the second half. The track between Satyaraj and Gopichand related to their ideologies has not been established well.

Pakka Commercial had good scope for drama, but Maruthi narrates the film in a lighter vein which also makes the key court scenes look silly. The climax twist is quite predictable and one can easily know what is coming in.

The production values of the film are pretty decent. Music by Jake’s Bejoy is good but his BGM is quite ordinary. Dialogues by Maruthi are decent and so were the costumes designed for Gopichand. Editing could have been better in the first half.

Coming to the director Maruthi, he has done just a passable job with the film. One thing is sure the flair in his comedy has gone down when compared to his last few films. With Pakka Commercial, he has mixed comedy with courtroom drama but has failed to narrate it on a serious note in key areas. If he would have elevated the father and son angle on a serious note and added more drama, the output would have been quite better. But still, Pakka Commercial is not to Maruti’s standards.

On the whole, Pakka Commercial is a courtroom drama filled with passable comedy. The first half is slow but comedy takes the cake during this time. Things get better in the second half but the bland storyline and predictable proceedings take the flow down time and again. All those who love loud comedy without bothering about the logic and storyline can give this film a shot. Others can look for other options.