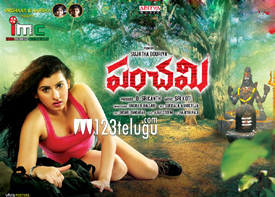 Young heroine Archana, has been trying hard to stay afloat in the industry. She is back with a heroine oriented flick Panchami which has hit the screens today. Let’s see how it is.

After capturing some interesting shots, an untoward incident occurs and she gets lost in the forest. Rest of the story is as to how she comes out of the dense forest and what all problems she faces during her journey.

Major attraction and eye candy of the film is Archana herself. She looks apt in her role and is super hot in the songs. The entire film is based on her character and Archana saves the film with her decent performance.

Second half of the film has some engaging moments. Background score of the film is good and elevates the film decently. Camera work is pretty good as the dense forest and other natural locations are showcased quite wonderfully.

This film has a story which is quite confusing. The way Archana’s character behaves in the jungle is a lot to be desired. After she gets lost in the jungle and is desperately looking out to escape, it is illogical to see her take up a different and unnecessary mission. All these factors and scenes have no clarity and make the film tedious.

Climax of the film is a huge mess and ends up in a hurry. After showing so much pain and struggle, the way the movie ends is silly and lacks justification. Graphics showcased in the film look cheap and do not create any impact. First half of the film has absolutely nothing to offer and just wanders here and there.

The film lacks proper narration and confuses the audience after a point. The actual story kick starts post interval and even that does not have any direction. Thrills showcased in the film are quite repetitive.

As said earlier, background score of the film is decent. Camerawork is pretty good as all the locations showcased create an impact. Music of the film is ok and so are the lyrics. Director Sujatha Bourya completely fails in her attempt of showcasing an intense thriller. Her choice of story is good but the way she has executed the film is below par. Screenplay is horrible as all the scenes lack clarity and confuse big time.

On the whole, Panchami is a confused, outdated and half baked film. Other than Archana’s glamorous look, this film has absolutely nothing to offer. Stay away from it even when it comes on TV.