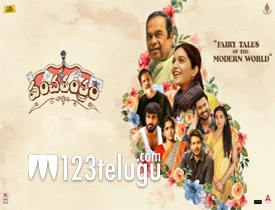 An anthology film named Panchathantram, starring legendary Brahmanandam and Swathi Reddy in key roles, has attained decent buzz with its promotional material. The film, directed by Harsha Pulipaka, has hit the screens today, and let’s see how it is.

The basic outlook of the film is good, and the idea of telling the stories linking them to human senses is appreciable. The dialogues are nicely written with good depth. Particularly in the second story, Shivathmika Rajasekhar talks about the key aspect of selecting a life partner in one’s life, which makes one think. Through this story, the filmmaker tries to say that knowing thyself is more important before entering a married life which is nicely articulated.

The last episode of Swathi Reddy, Aadarsh, and Utthej is emotional and heart-touching. It has a nice message about having confidence in oneself irrespective of the challenges people go through, which is impressive. There are a few subtle emotions that are nicely portrayed, and there are a few good moments here and there in the film.

Brahmanandam did a nice job as a narrator, and it was nice watching the legendary actor in a non-funny role. Though he appears briefly, Brahmanandam still makes his presence felt. Swathi Reddy, Rahul Vijay, Shivathmika, Divya Sripada, and Vikas Muppala impressed with their performances.

Though the primary idea is interesting, the movie isn’t completely engaging. A few stories had more scope but were just shown at the surface level, making them underwhelming. The exact concept of a few plots was not projected clearly. More depth and interesting scenes should have been included to make things engaging.

The pace of the movie is a tad slow, and the film gets boring at times. In addition, the editing was not up to the mark, and the film feels prolonged due to a few sequences. The first half, in particular, could have been better with a few more exciting moments and a fast narrative.

The very nature of the movie may not appeal to the masses, as it doesn’t have any commercial aspects. In addition, the length of this anthology needed to be short to make it register. A few stories could have had more impact had there been a lot more drama.

The music by Shravan Bharadwaj and Prashanth R Vihari is pleasant to hear, and a couple of songs were delightful. The cinematography by Raj K Nalli is fine, and he captured the visuals nicely as per each story’s theme. The editing is below par. However, the production values are good.

Coming to director Harsha Pulipaka, he did an okay job with his first film. His thought to convey his stories using the five senses is fine, but more effort was required to make the film engrossing. A few stories were nicely executed, but a few weren’t. The potential is visible, though.

On the whole, Panchathantram caters to a niche segment of the audience. The performances and a couple of stories make their mark. But the length and a few jading stories restrict the film’s impact. Those who love watching anthologies can give it a shot, but others might not find the movie great.