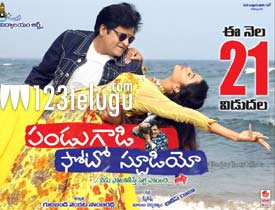 After a long gap, Ali has come up with his new film as a hero. Titled Pandugadi Photo Studio, this film has hit the screens today. Let’s see how it is.

Pandugadu(Ali) is a crazy photographer. Whenever he takes photos of unmarried people, they get hitched very soon. On the other hand, there is a village Yetimuka where none of the youth is getting hitched. Upset with this, the village heads bring in Pandugadu to take snaps of the wannabe brides and grooms. In this process, Pandugadu falls in love with Kanakratnam(Rishita). He starts fighting for his love and one fine day finds out a crazy link with the village and marriage situation in the village. What is that and how Pandu solves all these problems is the rest of the story.?

Ali still has it to play a hero even at this age and has given a very good performance in the film. His mannerisms and comedy touch brings a lot of relief in the film. Acting-wise, Rishita is just about okay but she provides superb eye candy throughout the film. Sudha, who did the role of Ali’s mom did a decent job in her limited screen presence.

It was good to see Babu Mohan after a long time on screen. His comedy track along with Jeeva’s performance was quite good in the film. Vinod Kumar, Sri Lakshmi, and a few other supporting casts did their roles to the best of their abilities.

The basic point of the film itself is silly and defies logic in many areas. There are way too many unwanted scenes and forced comedy in the first half which irritates the audience. Upon this, there is absolutely no flow in the proceedings. There was good scope to end the film in an emotional note but the makers failed to do it.

The second half goes for a toss as routine scenes are thrown time and again at the audience. The plot goes for a toss and the movie only concentrates on elevation and unnecessary comedy. After a point, the film gets so boring that you do not understand where the film is headed to.

Camerawork by Murali Mohan Reddy was just about okay. Editing is pathetic as close to 20 minutes could have been easily edited out. One song in the film is pretty decent but the BGM is pathetic and irritates you completely. The screenplay goes for a toss as the director Dilip Raja has disappointed many with his horrible narration. His plot is water-thin and he did not make use to the little content the film had and made the film in a silly manner.

On the whole, Padugadi Photo Studio is a silly comedy which has nothing going it’s way. Except for some comedy scenes and Ali’s decent act, this film bores the audience with logicless scenes, disappointing narration and lengthy runtime. Just ignore the film this weekend and look for better options.