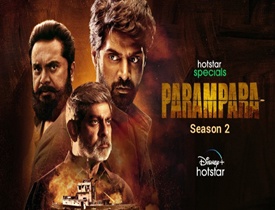 Disney Plus Hotstar scored a good hit in the form of Parampara. The streaming platform has returned with season 2 of this show which is streaming now. Let’s see how it is.

The story starts where it was exactly left in the first season. Gopi (Naveen Chandra) goes to prison for possessing an unlicensed weapon. There in the prison, Gopi gets into a tussle with Omar (Mayank Prakash) who works for Ratnakumar (Ravi Varma), an influential person in jail. Very soon, Gopi gets Ratnakumar’s attention. Later, Ratnakumar advises Gopi to kill his uncle Nagendra Naidu (Sarath Kumar), the very reason why he landed up in jail. Gopi explains that his motive is to destroy Naidu’s empire but not to kill him. How does Gopi handle this situation? How does Naidu counterstrike Gopi? What are Rachana and Mohan Rao’s(Jagapathi Babu) roles in this? This forms the rest of the show.

As the entire proceedings regarding politics and power happen within the same family there is a lot of scope for drama and the directors used it well. Every character that belongs to the family is well connected to this political angle. The strategic moves made by politicians generally to win the elections by going to any extent and the campaigning part are brilliantly shown. The twists were placed effectively.

The narrative is interesting as every character has its prominence irrespective of their screen time. Things start on a slow note but pick up the pace. The drama and tension involving Sarath Kumar and Naveen Chandra form the best part and have good scenes. The way Aakanksha’s character is linked to the main plot point is too good.

The emotions are also brought in well in key areas within a decent screenplay. Naveen Chandra shines in this season as well. His performance is one of the highlights of the show. Sarath Kumar and Jagapathi Babu were perfect and bring depth to the show.

The screenplay is uneven in several episodes. Certain aspects which were established well at the beginning do not take off and are left midway. Ravi Varma’s character was brought in as a support to Naveen Chandra but he is never seen again after the initial two episodes.

The screenplay says, Naveen Chandra became rich in very few months. But things were not presented properly to showcase his growth. One gets a feeling that the proceedings are wrapped up in a hurried manner in a few places which is one of the biggest drawbacks of this show.

If one expects a solid storyline they would be disappointed. It deals with the age-old power politics and crimes involving powerful families. The mining backdrop is a beaten-to-death concept. The action scenes were not handled well and looked odd.

The makers have spent a bomb and it is reflected in the grand production values. The background score by Naresh Kumaran is decent and it contemplates the visuals. The cinematography is impressive, especially the scenes involving the mining aspect.

The editing was too crisp. The duration was blamed for the first season. Hence the makers decided to keep this season short. But few key scenes suffer due to a lack of continuation. Directors Krishna Vijay L, and Vishwanath Arigela tried hard to showcase the proceedings in an engaging way but the issues in writing created so many obstacles.

On the whole, Parampara S2 has scope for good drama and engaging screenplay but is brought down by uneven sequences. The writing needs to be blamed for making it underwhelming. The performances are splendid and if you love watching power politics with a solid star cast, you can give it a try this weekend. But there is nothing new that is showcased