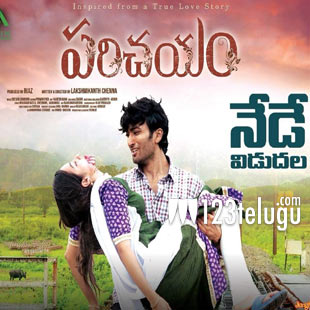 Parichayam is one small film that caught the attention of everyone with its pleasant trailer. After a decent round of promotions, the film has hit the screens today. Let’s see whether it lives up to its exceptions or not.

Anand(Virat Konduru) and Lakshmi(Simrat), who are childhood friends fall in love with each other. When everything seems to be going fine, a small family disturbance causes Lakshmi to lose her memory. The rest of the story is about how Anand goes against everyone and helps Lakshmi in her troubled times and wins her love back.

Debutant Virat is good looking and has a decent screen presence. His acting in a few crucial scenes is nice. Especially, the hospital scene in the second half where he showcases emotional variations to convince his father is very impressive.

Coming to heroine Simrat Kaur, she looks cute as a village girl. Compared to her first film, she has given a mature performance in emotional scenes. Noted actors, Rajeev Kanakala and Prudhvi fit their roles of responsible fathers.

A few intense dialogues between them reflect the contemporary mindset of parents and their aspirations. Some funny situational comedy scenes between the hero’s gang have come out well.

The plot looks decent on paper but the emotions were not executed in a proper manner on screen. Except for a small twist in the heroine’s role, the entire film has nothing new to offer.

Falt narration and slow screenplay were also other minuses for the film. After a point of time, things get rushed and the film takes too many cinematic liberations which dilute the core theme.

Senior actor, Shiju’s role is wasted as it has no proper justification and is nowhere related to the storyline.

One of the major plus points of the film is its eye candy sceneries and beautiful environment. As the film is set up in the Aaraku backdrop, cinematographer Naresh Kancharana has done top-notch work in capturing the natural locations. Editor Praveen Pudi has done an okay job as he kept the film’s runtime short and crispy. Music by Sekhar Chandra is below average but his background score is good as a song that comes in the latter half is captivating both audio and video-wise.

Lastly, speaking about the direction, Lakshmikanth Chenna, who raised decent hype by unveiling a few pleasant promos has failed to live up to the expectations. Soon after watching the film’s promos, everyone excepted intense and emotional moments from the film but sadly the director failed to bring proper depth to the proceedings with his not so engaging narration.

On the whole, Parichayam is yet another love tale that struggles at crucial times. Though the chemistry between the lead pair and a few emotional scenes in the latter half is good, the lack of proper depth in the proceedings and flat narration makes it a below-average fare this weekend. Watch it only if you have nothing else to do.