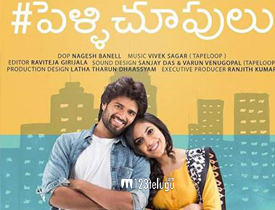 Pelli Choopulu, is one film which has created a lot of buzz off late. Right from the day the trailer was launched, this film has received positive feed back. The romantic comedy is directed by Tarun Bhaskar and has Vijaya Devarakonda and Ritu Varma as the main leads. Let’s now see whether the film lives up to the buzz that it has created.

Prashanth(Vijay) is a happy go lucky youth who takes things very easy in life. He does not want to follow the herd mentality and aims of becoming a chef. Seeing his carefree attitude, his father decides to get him married and fixes his alliance with a career oriented girl called Chitra(Ritu Varma).

To Prashanth’s bad luck, Chitra reveals to him that she is not interested in getting married and wants to start a food truck business. A disappointed Prashanth, leaves the scenario and decides to move on in life and finds yet another girl in a well to do family.

But there too, he gets disappointed as his would be father in law asks him to start up his own business first and then ask for his daughter’s hand. Left with no choice, Prashanth seeks Chitra’s help and starts a food truck business in partnership.

As expected, cupid strikes between the two who now have different personal goals. Rest of the story is as to how this couple solve their individual problems and get united in the end.

One of the brightest asset of the film is undoubtedly the freshness. Right from the principal characters to the set up, everything looks so contemporary. Credit should go to the director Tharun for writing some beautifully etched roles for every actor in the film.

Vijay Devarakonda is superb as Prashanth and is an actor to watch out for in the future. Being just his second film, the way he has portrayed his confused character speaks volumes of his talent. His chemistry with Ritu is just amazing and is also the selling point of the film. The way the couple converse and enact their roles is just lovely to watch on screen.

Ritu Varma takes you by surprise as Chitra. Her role as the strong willed independent girl brings a spring to the proceedings. She holds the screen with her beautiful emotions and at the same time looks gorgeous. The supporting cast does a wonderful job in the film. Especially Priyadarshi, who plays hero’s sidekick is a treat to watch. All his dialogues and one liners evoke superb laughs throughout.

First half of the film is quite brilliant and has some very breezy moments. The love story between the couple and the way all the confrontational scenes have been designed with a lot of freshness is what clicks with this film

As in every love story, this film is also quite predictable in its nature. Pace of the film dips a bit during the second half. Pelli Choopulu is not the regular commercial entertainer which you come across daily and a certain section of the audience might find it too slow. There are scenes which look repetitive and this could have been dealt with easily in the second half.

Pelli Choopulu is one of the most well made film in the recent times. Be it the writing or the romantic episodes that Tharun narrates, this film looks urban but at the same time, the Telugu nativity and flavour has been kept intact. Tarun Bhaskar’s effortless direction makes this film take another leap in terms of story telling in Tollywood.

Camera work is top notch and so is the art direction. Production values are superb as the film looks quite rich. Background score by Vivek Sagar is exceptional but his music is just about ok. Screenplay is a huge asset as many scenes have been narrated in a taut manner.

Pelli Choopulu is one film which comes as a breath of fresh air in the heavy pollution of commercial cinema. The film has many beautiful moments which one can easily relate to. With this film, Tollywood finds another talent called Tharun Bhaskar as his effortless narration makes things breezy throughout the proceedings. The film is bound to do well in A centres, overseas and especially the younger generation will lap it big time. Finally, all those who want to watch a clean and feel good love story, Pelli Choopulu is one film which should not be missed.