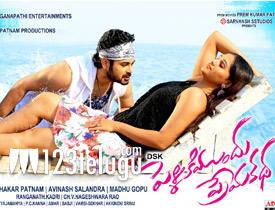 Director Madhu Gopu’s debut film, Pelliki Mundu Prema Katha with Chethan Cheenu and Sunaina in the lead roles has hit the screens today. Let’s see how is it

Santhosh (Chethan Cheenu) gets to meet his dream girl Sunaina only one condition that is she gets to hide her face from him and vice versa. Upon meeting each other, they begin their friendship and eventually fall in love with each other.

One fine day, a small misunderstanding separates them for good. After a few months, they both tie the knot in an arranged marriage without knowing that they are the same secret lovers.

How did they lead their life post marriage? Will their past come as a disturbance? To know the answers, you need to watch the film on the big screen.

Look wise, Chethan Cheenu is good and compared to his previous films, he has improved a lot with his acting. The various problems that the couple goes through after knowing the truth has been handled well.

Though the director has come up with a novel point, he completely misleads the proceedings with his improper screenplay. He hurried up the narration and creates many doubts for the audience. Hero’s dubbing was not up to the mark as it has no proper lip sync.

The way new characters enter the scene and forcibly evoke comedy will irritate you. The songs in the film are not up to the mark. Though the first half of the film is decent, the second half will literally make the audience to look at the exit doors.

Cinematography by P.C Kanna is good. His work reflects in every frame which is a big saving grace to the film. Music by Vinod is below par. His songs and background music do not bring any depth to the proceedings. Editing by Amer Reddy is just okay as the unnecessary comedy scenes could have been easily chopped off. Production values are good.

On the whole, Pellikimundu Prema Katha has some decent moments here and there. The pre and post marriage problems between the couple have been showcased well to some extent. Other than the comedy track between Thagubothu Ramesh and Satya, this film’s second half goes down and makes the film a routine watch this weekend.