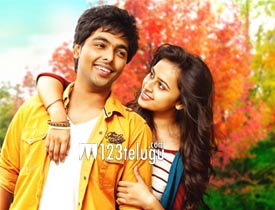 Music director turned actor, G V Prakash is back with an engaging murder mystery titled Pencil. Starring Telugu girl Sri Divya, this film has hit the screens today. Let’s see how this film turns out to be.

Shiva(G V Prakash) is a brilliant 12th standard student who is secretly in love with his class mate Maaya(Sri Divya). As time passes by, a star hero’s son, Nithin(Shariq Hassan) joins the school and becomes a huge head ache for all the girls in the school and also to the teachers who manage him.

His notorious activities get to a point where everyone starts hating him big time. Twist in the tale arises when Nithin suddenly gets murdered in the school premises and both Shiva and Sri Divya stumble upon his dead body.

Left with no choice, they decide to go behind the motive of this murder. Rest of the story is as to how do they investigate the mystery and find out who the actual murderer is.

Tamil film makers are known to take a very small point and weave a story around it. Same is the case with Pencil too. The way the murder mystery has been set up in a school premises is quite novel and interesting. Also, the way suspense factor is maintained till the end is good.

Screenplay is a huge plus as the makers have induced very good twists at regular intervals. G V Prakash looks and suits his role perfectly and does his job well. But it is the Telugu girl Sri Divya who takes things in her hands and delivers a wonderful performance.

Shariq Hassan, who plays the role of a bad student resembles Raghuvaran and gives a menacing performance. All the investigative scenes and the way they are revealed is very good. Climax of the film gripping and the twist that is revealed through a social message is just wonderful.

There are some logical errors in the movie. As the entire murder mystery is happening in the school, no one knows about the so called murder and only the lead pair continue to nab the culprit. Some logics like this go begging big time.

Songs cause a hindrance to the plot and disturb the flow of the film big time. The way Sri Divya’s character is narrated is a bit questionable. After hating the hero so much initially, she becomes close to him in just a scene and takes the deadly task of nabbing the murderer, this could have been shown a bit convincingly.

Camera work is decent and presents the film well. Art department could have done a better job as very less students are showcased in a huge school which looks weird in some scenes. Music is below average but the background score is nice. As said earlier, screenplay is the heart and soul of the film as it holds interesting moments together.

Coming to the director Mani Nagraj, he has set the Korean remake supremely well. The way he has made students the main protagonists and narrated the film with good thrills and held on to the suspense is appreciable.

On the whole, Pencil is a decent murder mystery with an interesting premise and engaging screenplay. The suspense factor and second half are huge assets. If you are done watching all the important releases from last week, and are looking at something different, do check out ‘Pencil’ which ends up as a time pass thriller.