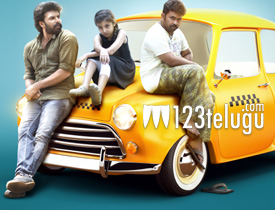 Ananya(Sara Arjun) is a 4th standard girl who likes playing long jump which is also her father’s favorite sport. She keeps a personal goal of winning a gold medal in her school competition but unfortunately gets disqualified because of her physical director.

A disappointed Anaya decides to take revenge on her P.D and hires a rowdy to beat him up. Why did the P.D disqualify Ananya? What are the issues between them? and what did the rowdy do to the P.D? That forms the rest of story.

The major plus point of the movie is Baby Sara’s acting. The young girl is very natural and does a superb job in all the emotional scenes. She carries the entire film on her shoulders and manages to impress.

The idea of setting up a story around a little girl’s emotions is good. Dulquer Salmaan’s guest appearance in the climax is yet another plus point for this movie.

One of the major drawbacks of this movie is director Midhun Manuel’s screenplay. Attempting a movie on a child’s emotions is good but he loses his grip on projecting the emotions in a right manner.

The movie starts on a dull note and carries on till the end with the same mood. The hero’s character is designed so badly that not even a signal scene manages to impress us.

Production values are okay. Director Midhun failed in his approach and narrated the film with a disappointed approach. Editing by Lijo Paul is adequate. Shaan Rahman’s music impresses in parts. Camera work by Vishnu Sharma is good.

On the whole, Pilla Rakshasi has a decent concept but it is completely spoilt by some lack lustre narration and disappointing screenplay. Except for Baby Sara’s performance this film has nothing to offer and can be ignored this weekend.