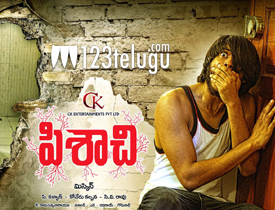 Continuing with the trend of dubbing films, yet another horror flick titled Pisachi has hit the screens today. Let’s see how it is.

Siddharth(Naga) is a violinist who lives alone in his apartment. One fine day, he comes across a injured girl named Bhavani(Prayoga) and tries to save her. To his bad luck, Bhavani dies on the spot.

Twist in the tale arises when Bhavani’s soul enters his apartment and starts torturing him. Who is Bhavani ? Why is she torturing Naga who had actually tried to help her ? To know answers to these questions, you need to watch the film on the big screen.

Even though this film does not boast of big stars, the way it has been narrated is interesting. Story of the film is unique and has been written cleverly. There are enough thrills which are elevated with a thumping background score. The film has enough thrills and keeps the audience engaged most of the times.

The main lead, Naga has done a decent job in his role and carries the entire film on his shoulders. His expressions and body language gel with theme of the film quite well. Prayoga has limited scope but does well in her role.

Pisachi is more of a thriller than a horror film. Even though the makers had good scope of adding horror elements during the climax, they have failed to do so. This film has a striking similarity to the Hollywood flick Ghost, and all those who have seen the original will be disappointed.

Camerawork is pretty good and so is the background score. Director Miskin has succeeded in engaging the audience but has failed to elevate the horror aspect. Editing of the film is quite crisp and so is the run time. Production values are good and the art department has done a wonderful job with the entire set up.

On the whole, Pisachi has some decent moments going its way. Engaging story line and a thumping background score are basic assets of the film. On the flip side, lack of known faces and ineffective horror elements spoil the overall outcome of this film.