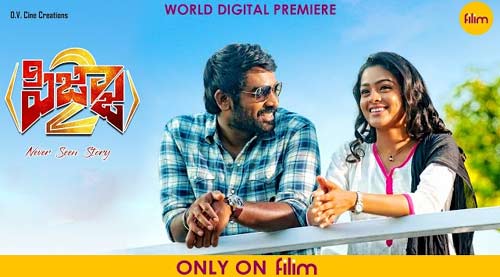 So, continuing the series of reviewing OTT shows and films, our today’s pick is the old Vijay Sethupathi starrer Pizza 2. The series is available on Shreyas ET App. Let’s see how it is.

Kiran(Vijay Sethupathi) is a music director who is trying to make it big. He is close friends with Vinod(Ranjith) and DJ(Arjunan) but does not like their bad habits as Vinod and DJ are mad about drugs, adult videos and often get into trouble in spite of Kiran warning them. On the other hand, Kiran spots Meera(Gayathrie) on a bus and falls for her. The couple sees each other for a while but things take a U-turn when Kiran finds a video of Meera through his friends. This video shocks him and he runs to rescue Meera. What is this video? How did it damage Meera? and what did Kiran do to change all this? That forms the rest of the story.

This was the film that was made early in Vijay Sethupathi’s career and that is the reason, he looks a bit raw. But still, he manages to hold the attention till the end with his decent act. Heroine Gayathri gets a bigger role and has a lot of scope to perform and the young actress does well in her complex role.

The story idea and how youth is misusing the technology have been set up well in the film. The film starts on an interesting note and a few thrills which give away crucial suspense have been executed well. The BGM of the film is good and the visuals in night mode create a good effect. The interval bang is also good.

As said earlier, the story idea is good but the manner in which director Ranjith narrated it is not that great. The story only starts during the interval time. The director could have nicely used this time to set the characters well but that does not happen.

Also, the film runs at a snail’s pace and is a put off for a thriller. There are not many scenes which are gripping and this is where the film goes for a toss. The narrates a good effect and when you feel there will be a scene that will create an impact, sadly, that does not happen.

On the whole, Pizza 2 is a film that has a decent premise. But a dull narration and slow pace spoil the fun. Vijay Sethpathi is the only solace in the film and the way he deals with a few key twists looks good. But the film as a whole is dull and has nothing new to showcase.